WASHINGTON (CNN) -- Slave labor in developing countries such as Brazil, China and India is fueling part of their huge economic growth, according to a State Department report released Wednesday. 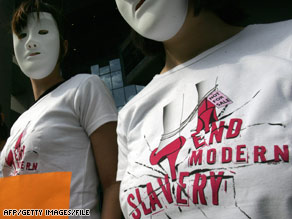 Amnesty International activists protest human trafficking during an event in Greece in March.

The department's annual "Trafficking in Persons Report" found increased allegations of forced labor made in connection with a variety of agricultural products and manufactured goods in developing countries.

In Brazil, the report found a "trafficking phenomenon." It said thousands of trafficked and forced laborers had been found on plantations growing sugar cane for Brazil's booming production and export of the biofuel ethanol.

The report cites shrimp processed in Thailand and Bangladesh; clothing from Bangladesh, India, Jordan and Malaysia; and bricks made in India, China and Pakistan as being among the products of booming industries in which workers are subjected to forced labor, debt bondage and hazardous working conditions. Laws are not adequate to punish those responsible, it adds.

China was found to have a "significant" problem with forced labor, including forced child labor. Children as young as 12 are reportedly subject to forced labor under the guise of "work and study programs" and subject to excessively long hours, dangerous conditions, low pay and physical abuse. The report found China's growing brick industry is fraught with cover-ups of the problem.

For the fourth year in a row, China was put on a "watch list" of countries that could face sanctions if they don't improve their efforts to combat trafficking.

India was also placed on the watch list for not doing enough to solve its trafficking problem, according to the report. While commercial sexual exploitation remained a problem in India, the State Department found internal forced labor "may constitute India's largest trafficking problem." It said men, women and children are forced to work in brick kilns, rice mills, agricultural businesses and embroidery factories.

Once again, the report found U.S. allies in the Persian Gulf to have dismal records on trafficking.

Saudi Arabia, Qatar, Kuwait and Oman were listed as destination countries with widespread trafficking abuses. The report cites forced laborers trafficked from Asia and Africa who are subject to restrictions on movement, withholding of passports, threats, and physical and sexual abuse. The report found those countries made weak efforts to rescue the workers and prosecute the traffickers.

All About Human Trafficking • U.S. Department of State