Charities forced to do more with less

(CNN) -- Ordinary Americans aren't the only ones being punished by tough economic times. Charities say they need help, too. 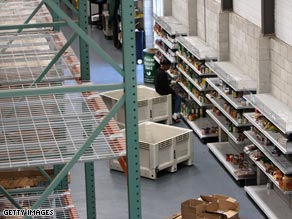 Food bank shelves across the country are getting emptier because of high food prices and increased demand.

Charitable groups that help the poor -- food banks, thrift stores, shelters -- say the slumping economy is eroding their ability to help the nation's needy. They report declining donations and a surge in people seeking help.

"This is new for us," Bolling said. "People are giving up buying groceries so that they can pay rent and put gas in the car."

National charities like Goodwill Industries International Inc. and The Salvation Army give the same grim assessment -- donations are down, needs are up.

At least 1.3 million more people have enrolled in the federal Food Stamp Program compared to last year, says Ross Fraser, a spokesman for America's Second Harvest, one of the nation's largest hunger-relief groups. It donates food to at least 200 food banks.

"People who have been in food banking for years say it's the worst they've ever seen," Fraser said.

People often assume food bank customers are homeless. But several food bank officials across the country say that many of their customers are working-class people and their numbers are increasing.

They are people like Lynette Copeland, who works full-time as a clerk at a rehabilitation center in Atlanta, Georgia. She's buying a Habitat for Humanity house and drives a car. But she says she doesn't make enough money to pay her bills.

Copeland says she depends on the Atlanta food bank to feed the four grandchildren she raises alone. She says the high costs of food, fuel and daycare force her to eat meat sparingly and shop at Goodwill.

"Although everything is going up, your pay rate doesn't go up," she said.

Lately, Copeland says she has noticed a change in the makeup of the customers visiting her food bank. Instead of the homeless and destitute, people come from all walks of life: the elderly, men in security guard uniforms and mothers with children.

Many are first-timers. Some are too ashamed to ask for food in front of others; so they walk to the side of the food bank where fewer people are gathered to receive food, she says.

"I'm never ashamed to ask for help," Copeland says. "I don't care how people look at me."

Charities blame their struggles on a brutal convergence of factors: rising food and fuel prices, the foreclosure crisis, and a decline in federal donations to food pantries.

Donna Rogers, a spokeswoman for the United Food Bank in Mesa, Arizona, says her group is trying to do more to accommodate the surge in customers. Her bank distributes food to soup kitchens and shelters in Arizona.

They are trying to give more, though, with less. Donations of canned goods are down 35 percent from last year; dairy and frozen meat donations are down by 26 percent, Rogers says.

The decrease in donations is coming at the same time food prices are increasing, she says. The price of macaroni and cheese, for example, increased by 44 percent from last year's price.

"It's been the worst case of food inflation of 20 years," Rogers says.

The amount of surplus food they receive from the federal government is also decreasing.

The federal government's food donations didn't decline because it decided to provide less, she says. It declined because the American agricultural industry is experiencing strong sales and record exports.

The federal government buys surplus food from farmers to donate to charities. Those farmers, though, have less surplus food to sell because the agricultural market is so strong.

A farm bill pending in Congress would increase aid to food banks, but it hasn't passed yet, says Fraser, with America's Second Harvest.

"If the farm bill is passed, it'll give millions of dollars in aid to food banks," Fraser says.

Even if the farm bill is passed, just getting food to needy people may become a problem. High fuel prices are bleeding charities, several say.

The executive director of one food bank in Orlando, Florida says one of his drivers paid $880 to fill up a tractor- trailer hauling donated food.

It would have cost about $660 to fill up the tank last year, says Dave Krepcho, executive director of the Second Harvest Food Bank of Central Florida.

"This is getting really crazy," Krepcho says. "If those trucks don't move, the food doesn't flow."

People are even turning to charity in unexpected places, says one Salvation Army spokeswoman.

Spokeswoman Melissa Temme, said a Salvation Army shelter in one of the most affluent counties in Kansas recently reported it was filled to capacity with a waiting list.

The 13-year-old center has never been full before, she said.

Salvation centers across the country are reporting similar stories, she says.

"Some areas had more people coming to them and other areas had the same number of people but the extent of their need increased," Temme says.

Copeland, the Atlanta food bank customer, says she can't envision a day when she won't have to depend on charity for survival. Her bills are too much and her pay too little.

And, she says, her faith helps her through these tough times.

"If you don't have a strong spiritual foundation, you cannot survive what's going on today," she says.

"I get through with a lot of prayer." E-mail to a friend

All About Hunger • Inflation Rate