WASHINGTON (CNN) -- Months of planning have led to this moment -- Wednesday's official arrival ceremony for Pope Benedict XVI's first visit to the United States in his three years as head of the Roman Catholic Church. 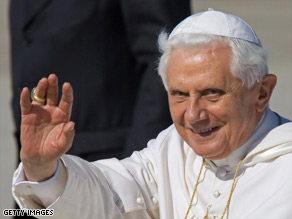 Plans for Pope Benedict XVI's visit to the United States have been in the works for months.

"The White House staff, across the board, we are all very excited," said White House Press Secretary Dana Perino, calling the visit "wonderful, historic."

President Bush and first lady Laura Bush, who greeted the pope Tuesday on his arrival at Andrews Air Force Base, will welcome the pontiff in an elaborate ceremony Wednesday morning on the South Lawn of the White House.

"It will be one of the largest arrival ceremonies ever held at the White House," Perino said. "And the weather conditions are expected to be spectacular, so that will make it even more special, since this time of year can be dicey in that regard."

In fact, said a senior Bush aide involved in the planning process, officials have been "checking on the weather for weeks" in anticipation of the visit.

The excitement is palpable in the White House, the aide said, especially with the pope's arrival just hours away.

Work on Wednesday's ceremony began in earnest last fall when White House staffers first met with representatives from the U.S. Conference of Catholic Bishops and the Archdiocese of Washington to discuss the visit, the aide said.

The talks expanded beyond the White House meeting to the planned Mass at the Washington Nationals' new baseball stadium, Nationals Park, and papal events in New York City, which include another Mass at Yankee Stadium.

As part of the preparations, the pope's advance team traveled from the Vatican to visit the White House last year, the aide said.

The arrival ceremony will largely mirror others involving heads of state, with some modifications, including the addition of a musical performance of "The Lord's Prayer" by soprano Kathleen Battle.

"This is a little bit different, in that the head of state is also the head of the Catholic Church that is visiting the White House," Perino said.

Meeting the enormous demand for tickets to the White House ceremony has been a challenge for the event planners. About 9,000 people attending the event will be ticket holders, with an additional 3,000 spectators consisting of White House passholders and their guests, according to the senior Bush administration official.

The event will include public remarks by the president and the pope. Bush will tell Benedict "that the hearts of the American people are open to the Holy Father's message of hope," Perino said.

"And he will hear from the president that America and the world need to hear his message that God is love, that human life is sacred, that we all must be guided by common moral law, and that we have responsibilities to care for our brothers and sisters in need at home and across the world," she said.

Following the ceremony, a one-on-one meeting is planned between the two men in the Oval Office. That meeting is slated to last 30 to 40 minutes, but could go longer.

"When you're talking about a meeting with the Holy Father, the schedule's only a suggestion," the Bush aide said. E-mail to a friend