MEMPHIS, Tennessee (CNN) -- When James Earl Ray bought a white Mustang in the summer of 1967, he stood on a streetcorner in downtown Birmingham, Alabama, and pulled the cash out of his shirt pocket, $2,000 in all. 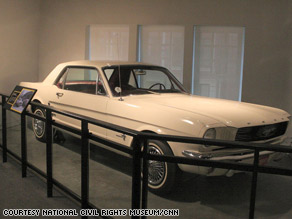 James Earl Ray paid $2,000 cash for a white Mustang, similar to this one, the seller told the FBI.

"Mostly twenties, with some $100 bills," the seller would later tell the FBI about the sale to Ray, later convicted of assassinating the Rev. Martin Luther King Jr.

"He must have had a roll of twenties, if he paid that guy $2,000 in twenties, that'd be a lot of money," said Jerry Ray, James Earl Ray's brother.

Police Capt. John Light, who was chief of detectives that year in Ray's hometown of Alton, Illinois, suspects the wad of money came from a still-unsolved bank robbery.

While Ray was on the run as a prison escapee from Missouri that summer, two men walked into the Bank of Alton with a pistol and a sawed-off shotgun. Both wore stocking masks. The leaner man went behind the counter, scooped up the cash and fled with close to $30,000.

Within a day or two of that robbery, Ray would leave the area and head to Canada -- just as he did almost a year later when he fled the scene in Memphis, Tennessee, after King's murder.

Light told CNN the stolen bank money consisted mainly of $20 bills. The partially burned shotgun and the stocking masks were found abandoned in a wooded area near a cemetery where Ray's mother is buried.

Ray returned from Canada and bought the Mustang after seeing a classified ad in Birmingham the month after the robbery. In the months to come, Ray would keep spending $20 bills.

When he drove back to Birmingham six days before the murder to buy a .30-06 high-powered hunting rifle for just under $250, the gun store salesman later told investigators, "I remember he paid for the gun with $20 bills, paid cash."

On April 4, 1968, only hours before King would die, the landlady at the boarding house where Ray rented a room told police, "He gave me a $20 bill" when he paid for a week's rent just across the street from the Lorraine Motel.

In the sporting goods store where Ray went to buy binoculars, the salesman told police, "He gave me two twenties; I think he had two twenties left... The bills came out of his right pocket, neatly folded, and nothing but bills."

For Light, the bank holdup is the most likely answer to the question of where Ray got the money to travel as a fugitive to Canada and Mexico, then to flee again to Canada and finally London, England, after King's murder.

"Thirty-thousand dollars back in 1967 was a lot of money," Light said.

In London, Ray ran short of money. Four days before he was caught, he robbed a bank. His thumbprint was found on the holdup note.

He got little more than $200 -- enough to buy an airline ticket to Brussels, Belgium, where he hoped to join mercenaries fighting to keep white rule in southern Africa.

He was stopped at a London airport when a police sergeant spotted his phony Canadian passport.

Ray lived very cheaply on the run. He got change back for his $20 bill at the Memphis boarding house -- a week's rent there was $8.50.

The original prosecutors in the Memphis case decided it would not have cost that much for all of Ray's travels.

"He was living on a dollar to two dollars a day," said current prosecutor John Campbell. "He was even darning his own socks to be able to save money."