Shall we dance? Protocol of the tango hall

(Budget Travel) -- Dancing the tango in Argentina takes more than just a command of the steps and some semblance of rhythm. You also need to understand the subtle signals that regulate life in a milonga, or tango hall, where tradition still holds great sway. With one misstep, you may kiss finding a partner good-bye. 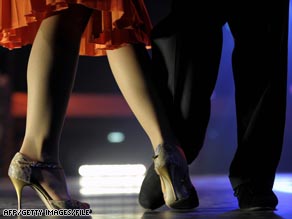 The golden rule of tango is the less chitchat, the better.

The man always invites the woman to dance, but not verbally. Instead, he tries to catch his desired partner's eyes from across the room and nods, a move called a cabeceo. This allows a woman to avoid a man she doesn't want to dance with and saves the fragile male ego the humiliation of being turned down publicly. "Some even consider it a faux pas to walk over to a woman's table when she is not looking at you," says Julio Balmaceda, a tango dancer and instructor in Buenos Aires.

After a woman accepts a man's cabeceo with a nod or a smile, they meet on the dance floor. A tango at a milonga is essentially a 12-minute date -- pairs usually start dancing at the beginning of a three-to-four-song set called a tanda and then switch partners during the musical interludes that separate the sets. Breaking off a dance in the middle of a tanda is considered an insult. A pair who dance together for three tandas in a row are proclaiming themselves off-limits to other prospective partners.

"Unless you want to dance with the woman you came with all night, you have to make signals to other men that it's all right to ask her to dance -- by dancing with other women yourself or sitting at separate tables, for example," says Marina Palmer, author of "Kiss & Tango: Diary of a Dancehall Seductress."

With so many people sharing such a tight space, collisions are inevitable -- especially when men go against code and lead their partners the wrong way (the right way is counterclockwise, around the floor). Other times, accidents happen when a man leads his partner into showy kicks or spins -- a crowded milonga no-no. If two couples bump into each other, the man who caused the collision is expected to extend a verbal apology to the offended couple.

But the golden rule of tango is the less chitchat, the better. "If you or your partner makes a mistake, stumbles, or steps on the other's toes, try to ignore it and go on as if nothing happened," says Palmer. "The idea is to hang on to the moment and the intense communion between two dancing souls. If you start apologizing too much, the spell is broken."

If you want more than a tourist-friendly tango show, here are three authentic Buenos Aires milongas. Don't plan on arriving before 11 p.m.