Surviving a flight with your baby or toddler

(CNN) -- Flying with a baby or toddler can have its fair share of turbulence. From finding a place to change diapers to keeping your child quiet to dealing with eye-rolling passengers, parents have their work cut out for them on a plane. 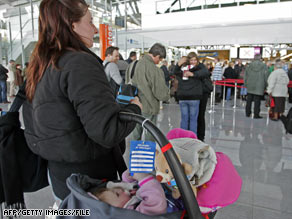 To keep your baby occupied on a flight, bring new toys or toys she hasn't seen for a while.

Still, with some careful thought before, during and on the flight, you and your baby can survive the ride with minimal headaches.

In a perfect world, your child will sleep on the plane. But kids can be unpredictable -- as can flight delays -- which makes the planning process tough.

If your child sleeps well in the car, your best bet is to schedule a flight during nap time, said Elizabeth Pantley, author of Gentle Baby Care.

But if his or her nap time isn't like clockwork, you're better off not trying to schedule a flight during usual sleeping time, because the baby might stay awake for the whole flight and act fussy, she said.

Pantley suggested requesting the bulkhead seats and a bassinet if you have an infant. However, she cautioned that the front of the plane is less convenient with older babies and toddlers because, with the absence of under-seat space and seat pockets, you'll have to store toys and supplies in the overhead compartment, making them less accessible. iReport.com: Share your experiences of flying with kids

Parents shouldn't count on anything on the plane keeping their children occupied, Pantley said. It's important to bring plenty of toys, especially unfamiliar ones that the child can explore for the first time on the flight. Rather than buying all new toys, you can take away some of their toys for a time and have them resurface on the flight, she said.

Remember, your young child can also be easily amused by lots of things, even something as simple as a crinkled, empty bag, said Rachel Fishman Feddersen, director of Parenting.com.

Bringing an ample amount of snacks is key, because "the last thing you want is to be trapped on a plane with a toddler that has not eaten," Feddersen said. These foods can also help the babies with ear popping and keep them occupied in flight.

As an added bonus, Feddersen said, by distributing them to neighboring passengers, you can make some friends of people who may not be thrilled about sitting next to the family with a baby in tow.

If two parents are flying with the child, Feddersen suggests sending one on the plane early to "get your sails set up." Meanwhile, the other adult can wait with the child in the gate and board as late as possible.

This will give your child a chance to be mobile and perhaps tire before having to settle in a seat for an extended period of time, she said.

For parents traveling without the help of another adult, she suggested boarding early to get the child comfortable with the plane and to set up supplies you'll need to entertain the baby. Of course, if your child has experience on planes and doesn't like them, there's no need to prolong the misery by boarding early, she added.

Those parents who can afford to buy their children separate seats may find their babies or toddlers are more comfortable and likely to sleep in car seats than on their laps, Pantley said. The added height can also let them glance out the window and enjoy the sights, she said.

Of course, bringing a car seat onto the plane means carrying it through the airport.

To deal with that inconvenience, several companies now make car seats that turn into strollers, while some other car seats attach to rolling suitcases.

If you do hold your child on your lap, avoid strapping a single seat belt around both you and the baby, because it's unsafe, Pantley said.

Most parents know to change their babies' diapers at the last possible moment before boarding. But even taking that precaution is no guarantee you won't have a diaper emergency in flight.

Changing tables are scarce on airplanes. So, for diaper changing emergencies, keep a portable changing pad handy so you can change your child's diaper anywhere -- both in and out of the bathroom, Feddersen said.

Wherever you change your baby, remember that flight attendants are handling food and therefore can't also touch dirty diapers, Pantley said. Plus, she said, they probably don't want to. She suggested using a plastic bag from home or the air sickness bag and then throwing it out in the bathroom trash.

Lorri Kwong, a mother of four, learned the hard way that one of her children has motion sickness. On a flight from Kansas to Korea, she was prepared with extra clothing for the children, but when her daughter threw up on her husband, he had to endure his smelly clothes for the rest of the long flight.

Her lesson learned: Bring extra clothes for the kids and parents.

It's no secret that many fliers dread sitting next to a baby. But as long as you signal to those around you that you're doing your best, neighboring passengers are more likely to lend their sympathy.

If your child is misbehaving, get on neighboring passengers' good sides by gently but firmly admonishing the baby, Feddersen said. "Not in a mean way, but in a very audible way so that people know that you're doing your best to keep your kid under control, that you're not just letting your kid run free willy-nilly."

Simply smiling and telling others that you're sorry and you're doing the best that you can may also win you allies, Pantley said.

On the other hand, Pantley said, "if you're defensive and angry, you'll make them more annoyed."