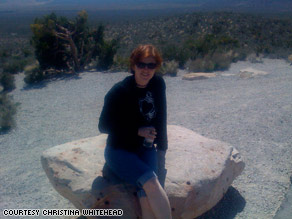 Christina Whitehead vacationed in Las Vegas, Nevada, after doing business there, saving on airfare and lodging.

That seems to be the sentiment of a growing number of workers who are extending business trips to squeeze in some vacation time, surveys from Orbitz and PhoCusWright suggest.

The trend could be blamed on the soft economy, rising travel costs and busy schedules affording less time to fit in traditional getaways, said Dean Sivley, senior vice president and chief operating officer for Orbitz for Business and Alliance.

"If my plane ticket is already paid for and if it's not costing my client any additional money for me to stay a few days ... it makes sense to me that I might as well use that," Christina Whitehead, a meeting and event planner based in Atlanta, Georgia, said of the strategy.

Whitehead is "not a Las Vegas fan," but when business called for her to be there, she decided to take advantage of the luxurious resort where her employer put her up.

Joined by her husband and two friends, Whitehead spent the weekend after her conference enjoying what the city had to offer outside the casinos. And even though she began picking up the cost of the hotel room once the event ended, the hotel continued to apply the pre-established discounted rate to their room. This is a common perk of the meetings and convention industry, she said.

Nearly three-quarters of 450 participants in a recent Orbitz for Business/Business Traveler Magazine said they've added a leisure component to a business trip within the last year.

In an unrelated PhoCusWright survey released last year, slightly less than half of 500 participants said they'd extended a business trip for leisure purposes over the previous year.

Generally, resort destinations like Las Vegas are more expensive over the weekend because that's when their business arrives, business travel expert Joe Brancatelli said via e-mail. On the other hand, "big city and suburban hotels charge more during the week and discount on the weekend because their business is during the week," added Brancatelli, editor of joesentme.com, a Web site for business travelers.

"The trick to keep prices low is to do the resorts during midweek and the urban destinations on the weekend," Brancatelli said.

The last thing you want to come out of your business-trip-turned-vacation is skepticism from the IRS. For those paying for their travel, Tom Ochsenschlager, vice president of taxation at the American Institute of Certified Public Accountants shares these rules on deductions:

Some companies encourage tacking on leisure stays because they could add up to savings for the business itself, Sivley said.

For instance, if two economy plane tickets cost less than a single business class seat, a company may prefer its employee take the two coach seats and use the extra for a guest, provided that's within the travel policy, Sivley said. And, many airlines have reintroduced the practice of charging less for minimum stays or Saturday stays. It could work out in companies' favor, then, for the traveler to stick around through the weekend, Sivley said.

It's important not to press your financial luck on any business trip-turned-vacation, and that means not charging your company for the leisure end of your trip, even though they sent you out there in the first place.

"If you are legitimately traveling on business, a company knows what your business expenses are," Brancatelli said. "So just keep your personal stuff on a personal card."

If your spouse and/or family joins you from the beginning of the trip and they have no business function, separate the incremental expenses they accumulate from your own, said Tom Ochsenschlager, vice president of taxation for the American Institute of Certified Public Accountants. Those extra fees may include charges for extra people in a taxi or the price of meals eaten with you.

Among those who pay for their own business travel -- for example, people who are self-employed or doing independent research for work -- Ochsenschlager said the most common mistake occurs when he or she assumes the trip is 100 percent tax-deductible because it had a business component to it.

In reality, if the majority of a trip is for pleasure, the business expenses you incurred would be deductible, while the transportation cost would not, Ochsenschlager said.

But if you spend the majority of your stay involved in business, both your transportation costs and business expenses would be tax deductible, he said.

The rules change a bit when you travel for business abroad and stick around for some leisure time.

Whitehead says that separating her personal expenses from client expenses is a major priority, and it's worth the extra effort.

She is hopeful her upcoming business event in Monte Carlo, Monaco, will turn into a much-needed vacation. "By the time I finish that program, I will want a vacation, because I'll be very tired. So I'll be someplace then where I can actually stay and enjoy it."

All About Business Travel • Air Travel • Travel and Tourism