WASHINGTON (CNN) -- The federal government's terrorist watch lists are far shorter than have been reported, the secretary of homeland security said Wednesday. 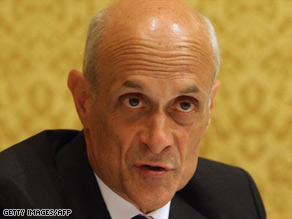 Michael Chertoff revealed for the first time that 2,500 people are on the "no fly" list and only about 10 percent of those are U.S. citizens. Individuals on this list are barred from boarding aircraft because intelligence indicates they pose a threat to aviation.

Fewer than 16,000 people are designated "selectees," he said, and most are not Americans. These people represent a less specific security threat and receive extra scrutiny, but are allowed to fly.

The American Civil Liberties Union has estimated more than 1 million names have been added to the lists since the September 11, 2001, terrorist attacks. The FBI, which manages the Terrorist Screening Database, said in August that there were about 400,000 people on its list, but that approximately 95 percent of those people were not U.S. citizens.

Watch more about the no fly lists »

But even if there are only 18,500 names on the no fly and selectee lists, thousands of people not on the lists are mistaken for those who are. They are often subjected to extra security at airports because their names are similar to ones on the lists.

A government program unveiled Wednesday is aimed at addressing that problem.

Under the program, Secure Flight, travelers will be asked to provide their full name, date of birth and gender when making airline reservations. The encrypted information will then be transmitted to the Transportation Security Administration, which will run it against the watch lists. The Department of Homeland Security believes the few pieces of additional information will dramatically reduce the number of people falsely identified as being on a watch list.

Currently, individual airlines compare the names on manifests with the no-fly and selectee lists. Their performance has been uneven, according to the Transportation Security Administration. Chertoff says having the government do the matching should improve efficiency and security.

The ACLU welcomed the privacy protections in the program, but Barry Steinhardt, director of the ACLU's Technology and Liberty Program, said it is based on "a hopelessly bloated watch list that has over a million names on it."

"It still is going to result in countless Americans being either denied boarding to a plane or being stopped [and] aggressively searched at airports," he said.

All About Air Travel • U.S. Department of Homeland Security