London: What to see

(CNN) -- Where do you begin in a city of this size? How about at the lively South Bank of the Thames, near Waterloo Station? Start with a spin on the London Eye, a colossal Ferris that will take you up 130 meters for an unmatched view of the city. 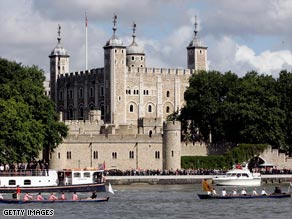 The Tower of London has a long and bloody past.

When you've made it back to terra firma stroll east along the river, past the Royal Festival Hall and the uncompromisingly brutalist National Theatre, navigating the crowds that cluster around the street entertainers.

Following the Thames Path will lead you to the Tate Modern. This gallery is housed in a converted power station, a space that is as stunning and modern as its collection of art works. Don't miss Mark Rothko's nine haunting "Seagram Murals", collected in one atmospherically lit room.

Just beyond the Tate Modern is Shakespeare's Globe Theatre, a 1997 reconstruction of the open-air playhouse where Shakespeare once worked. You can watch an authentic performance from April to October or visit the year-round exhibition on the bard's life and times.

If your legs are up to it, continue up the river past the Golden Hinde and Southwark Cathedral to the iconic Tower Bridge. Cross the bridge, pausing to admire the view, and climb Tower Hill to the Tower Of London.

This magnificent collection of buildings, dates back to the 11th century. As well as providing a fortress for generations of royalty it has a darker, bloodier history as a prison for the likes of Walter Raleigh and Thomas Moore, and the place where Henry VIII had two of his wives executed.

Heading west along the river you'll arrive at St Paul's Cathedral. Topped with a spectacular lead dome, its crypt is the resting place of Lord Nelson and The Duke of Wellington, among others.

A tube ride west will take you to Westminster, where you'll see the striking gothic bulk of the Houses of Parliament and their imposing clock tower, known as Big Ben, for its 13-ton bell. In the shadow of Parliament is Westminster Abbey, used for the coronation and burial of British monarchs.

Strolling through nearby St James's Park is the most pleasant way to reach Buckingham Palace, the Queen's London crash pad. If you buy a ticket you can snoop around inside, although only a tiny portion of the palace is open to the public.

The Mall leads from the palace to Trafalgar Square, where the towering Nelson's Column is flanked by huge bronze lions. On the north side of the square is the ornate National Gallery, with a huge collection that includes works by Leonardo, Botticelli and Monet, as well as Van Gogh's iridescent Sunflowers.

Next door is the National Portrait Gallery and just across the road is the attractive church of St Martin in the Fields, where you can enjoy free classical music recitals at 1pm on Mondays, Tuesdays and Fridays.

From here, Charing Cross Road will take you into the bustling West End -- the perfect spot for an evening of revelry. Try to make time to visit Leicester Square, Soho and Covent Garden, with its lively piazza .

After you've recovered from the night before you'll want to visit some of London's fantastic museums, most of which offer free admission. Best of all is the British Museum (Great Russell Street, Bloomsbury), a sparkling trove of treasures plundered from all over the world. Highlights of its vast collection are the ancient Egyptian mummies, its Roman and Greek antiquities, the Rosetta Stone and the Anglo-Saxon treasures of Sutton Hoo.

South Kensington boasts three superb museums. The Natural History Museum is housed in a beautiful Romanesque building and is best known for its dinosaur collection, with a replica of a gigantic Diplodocus skeleton guarding the central hall.

The neighboring Science Museum (Exhibition Road) has plenty of interactive displays, which make it particularly good for children and the Victoria and Albert Museum (Cromwell Road) is an intriguing hotchpotch of historical art, jewelry and textiles.

As well as the Tate Modern and National Gallery, art fans won't want to miss the Tate Britain (Millbank), with a collection of British art that includes pieces by Hogarth, Constable and Francis Bacon. The Turner Collection features oil paintings, watercolors and sketches by the master.

You can escape the city's relentless traffic at a number of green spaces. Regent's Park stretches from Camden to Marylebone. Have a picnic in Queen Mary's Gardens and peer through the fence into London Zoo at the park's north end.

For a longer stretch of greenery, Westminster's St James's Park leads to Green Park, which is a stone's throw from Hyde Park. In the middle of Hyde Park is the Serpentine lake, lined with deckchair-bound sunbathers in the summer, and beyond the lake is Kensington Gardens, home of the striking Albert Memorial and Kensington Palace, the former home of Princess Diana.

Do you agree with our London picks? Send us your comments and suggestions in the "Sound Off" box below and we'll print the best.