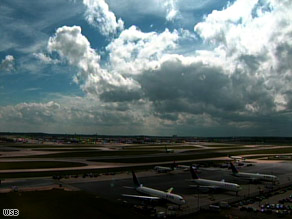 The facility south of Atlanta had problems processing data, requiring that all flight-plan information be processed through a facility in Salt Lake City, Utah, overloading that facility.

At about 9:30 p.m. ET, most major airports were reporting flights departing on time or with less than 15-minute delays. Newark International was still reporting delays of up to 1 hour and 45 minutes and LaGuardia Airport in New York reported 45-minute delays -- although weather problems were cited as the main problem.

John F. Kennedy International in New York and Hartsfield-Jackson Atlanta International were reporting delays of up to 30 minutes, although both of those airports also had experienced thunderstorms and other weather-related difficulties.

The administration said there were no radar outages and said it had not lost contact with any planes during the computer glitch. The roughly 5,000 flights that were in the air when the breakdown happened were not affected, just those that were waiting to take off. iReporter stuck in Philadelphia

"This is really not a safety issue, this is an aggravation issue," CNN aviation expert Miles O'Brien said.

The problem appeared similar to a June 8, 2007, computer issue that caused severe flight delays and some cancellations along the East Coast. iReport.com: Are you stuck at the airport?

iReporter Stephanie McCauley sat on the tarmac for more than an hour at Baltimore/Washington International Airport on Tuesday on a flight bound for Albany, New York.

"It happens. It's just weird, because you're sitting, and you don't know if it's going to be 20 minutes or 2 hours," McCauley said.

Cheryl Stewart, spokeswoman for Baltimore/Washington International Airport, said that as of about 3:40 p.m., some flights were being allowed to take off, but the FAA was no longer accepting new flight plans.

On the FAA's Web site, delays were being reported at all 40 airports on the administration's primary flight information map.

The worst delays were in the Northeast, Bergen said. Chicago's Midway and O'Hare airports in Illinois were reporting delays of up to 90 minutes.

The Web site, which normally lists the length of expected flight delays, was no longer listing that information Tuesday afternoon.

The total number of flights affected was unknown, although it was believed to be in the hundreds.

Mark Biello, a CNN photographer sitting on a delayed flight at Hartsfield-Jackson International Airport in Atlanta on Tuesday afternoon, said flights there were being cleared for takeoff one at a time.

Watch Mark Biello at the airport »

"They're releasing the planes but on a one-by-one basis, so it's really backed the whole system up, at least in the Atlanta area," Biello said.

At Philadelphia International Airport in Pennsylvania, iReporter Randy Hehn and his wife were on their way home to Denver, Colorado, after a trip to Europe. He said he'd left Stockholm, Sweden, 11 hours earlier.

"I don't really want to spend the rest of the evening in the airport; I'm hoping they get this fixed," Hehn said in a video posted on iReport.com. "I see planes moving around, but I don't know.

"We're just coming back from Europe, we're really tired, and this is bad news."

All About Federal Aviation Administration