Tracing my Jewish roots in Cuba

(CNN) -- Cuba is more than a thousand miles from my home in New York, but it's a place close to my heart. 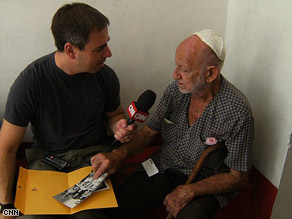 I went to Cuba to report on a country that appears to be on the cusp of a new era.

My focus was the future of U.S.-Cuban relations and the reforms under Cuban leader Raúl Castro. But a vague notion of exploring my family history in Cuba resulted in the most memorable story of the entire journey.

My grandmother, the daughter of Russian immigrants, was born in Havana, and my grandfather came to Cuba when he was just 3 years old. His family left Germany in the 1920s. To me, they were as much Cuban as they were Jewish.

Watch how everyday life has changed for Cubans »

My grandparents left Cuba in the late '40s so that their children would be born in the United States. The last members of my family to leave Cuba did so post-revolution, in the 1960s. I was eager to see what had become of the places they left behind.

Slideshow: Learn more about the Jewish population in Cuba »

When Castro lifted restrictions on religion in the mid-'90s, the once-dilapidated building that houses congregation El Patronato came back to life. Today, it's a thriving center for the local Jewish community.

When I arrived, the children's summer program was in full swing. A few dozen boys and girls were laughing and playing as they waited for lunch to be served. I wasn't prepared for the wave of emotions that overcame me. Had things been different, I could have been just like them.

My next stop took me to Habana Viejo. Jewish life in Cuba has its roots in Old Havana, where my great-grandparents settled. I walked the streets where they lived and stopped in at the only remaining kosher butcher in town. I passed the building that once housed the local synagogue where my grandparents were wed.

The current home of Adath Israel is a few blocks away. At the front door, Salomon Leyderman introduced himself to me as the oldest Jew in Cuba. He's 86. I took out some old family photos, and Salomon immediately recognized my great-grandfather, Salomon Sher. He shouted out in Spanish, "they were tailors!"

I couldn't believe my ears. This 86-year-old man told me how my great-grandfather was highly regarded in the community, how he belonged to many social organizations and how after the revolution, he made it possible for many Cuban Jews to leave the island and join him in Miami, Florida.

As he looked at a family portrait, Salomon began to cry. He recognized Luis Sher, my grandmother's brother. He said Luis gave him as a gift a suit to wear at his bar mitzvah, the Jewish ceremony marking a boy's transition into manhood. It took place more than 70 years ago, but he recalled the details as if it happened yesterday. Tears were flowing down my cheeks, too.

The following day, I called my father in New York and handed the cell phone to the oldest Jew in Cuba. This time there were no tears, just laughter.

After the call, Salomon looked at my sneakers and said they're good shoes. He told me he's a European size 42, and I should bring him a pair when I return. He then asked me to send him a card on Hanukkah and smiled.

Steve Kastenbaum is a New York correspondent for CNN Radio.

All About Cuba • Judaism • Raul Castro