(CNN) -- Vacation season is nearly over, and kids are returning to school with the telltale tans and smiles that mean they had a wonderful and relaxing holiday. 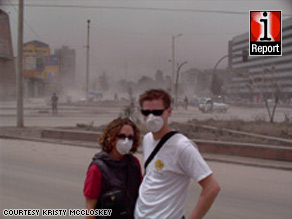 Kristy McCloskey and her husband were stuck in Ecuador after a volcanic eruption covered the town with ash.

Some of our iReporters weren't so lucky.

We asked CNN.com readers to send us stories of their worst vacation nightmares, and rain at the beach seems ideal compared with the tales we received. Here's a sampling of the worst of the worst -- but don't worry, most of our iReporters can look back on their vacation horrors and laugh. Well ... almost.

Bruce Bush's vacation in Hawaii started off perfectly. His family loved the "sandy beaches, hot weather and a tropical paradise I had never seen," he wrote in his iReport. But Bush, who had been sick for much of the vacation, was diagnosed with cancer in a Waikiki hospital three days before his family was scheduled to fly home.

"The doctors wanted to admit me right away and start treating me," he said.

But something didn't feel right about the situation. So Bush's parents (he was 17 at the time) declined treatment and decided to wait out the rest of the vacation and ask his regular physician about it when the family arrived home in Indiana.

"By the time we went home, I'd already started feeling better," Bush said.

The cancer diagnosis? A terrifying mistake. Bush had thought his illness was mononucleosis the entire time, and his doctor at home confirmed the diagnosis. iReport.com: Mistaken cancer diagnosis in Hawaii

"My doctor was looking at the report all confused, and he said of course your white blood cell count was up -- that's what happens when you get sick!" Bush said.

Bush's parents didn't tell him about the cancer diagnosis until the family had returned home and his own doctor had refuted it. "It was a crappy vacation for me just because I was sick," he said. "But for my parents, to know that your child has been diagnosed by doctors, and you're supposed to trust what these people have to say, I'm pretty sure they didn't enjoy the vacation. They were so relieved and happy that they stuck to their guns."

Donna Rogers and her family never even made it to the tropics. They took a cruise bound for the Bahamas and ended up spending their vacation on a ship with a broken propulsion system.

"It was Thanksgiving week, and my birthday fell on Thanksgiving, too," she said. "I thought I'd be on the beach in the Bahamas with a margarita in my hand for my birthday."

Instead, Rogers' cruise ship was stranded in Norfolk, Virginia, for the entire week. Passengers could go to a mall in Norfolk and to bars and restaurants on the ship, she said, but not much else. And when passengers began to get angry and restless, Rogers said the captain gave a mutiny warning and local law enforcement boarded the ship.

"You knew you were still in the U.S., but you felt like you were in another dimension," she said. "He said we were under maritime law, and any aggression toward the staff would be mutiny and would be dealt with accordingly." iReport.com: The cruise to nowhere

Rogers and her family were eventually able to leave the ship, and they spent the rest of their vacation with relatives in Virginia. The cruise line offered passengers a refund and a discount on another cruise, but Rogers says she would have to think seriously before getting on a cruise ship again.

"When cruises go bad, they go bad exponentially," she said.

Thanksgiving and birthdays aren't the only special occasions that can be spoiled by less-than-perfect vacations. Kelly Flores and her husband found themselves in the middle of a hurricane on their honeymoon. The couple was supposed to fly to St. Lucia, stopping briefly in Puerto Rico to change planes.

"Upon arriving in Puerto Rico, we discovered why our plane was not full and why our flight [to St. Lucia] had been cancelled," Flores wrote in her iReport. "Hurricane Georges, category four, was heading directly for Puerto Rico and would be there by nightfall."

Despite trying immediately to leave -- "get us on the next flight anywhere," Flores remembers telling the airline staff -- the newlyweds were stuck. Flores, a Virginia Beach, Virginia, native, says even though she was used to hurricanes, this one was the worst. iReport.com: Hurricane on a honeymoon

"When you're not home, everything's different, and it was much scarier," she said. "The hotel asked everyone to go to the ballroom. ... We could hear the steel shutters banging and hear the storm, and when we heard glass breaking, they got everybody into the older section of the building that was all concrete blocks."

After the storm passed, Flores and her husband made it to St. Lucia, where they stayed a few extra days. But the "coup de grace," as she put it, was on their flight home.

"We met a couple who flew out the same day we did and we asked if they got hit by the hurricane, and they said no. They were supposed to go through Puerto Rico, too, but their airline put them through Miami instead because of the storm," she said. "It's very frustrating."

And frustrating doesn't even begin to describe the feelings of many other iReporters who wrote in to tell us about their worst vacations ever. Mark O'Connor and his family suffered through airplane delays that made their trip to Dublin, Ireland, take two days. Once they arrived, they survived flooding and respiratory infections. iReport.com: The worst Christmas ever

Kristy McCloskey and her husband had to wear face masks during their entire trip to Ecuador. Ash from a recent volcanic eruption, which "looked very much like snow," destroyed the air quality and caused many businesses and the airport to close, delaying their return by three days. iReport.com: Volcanic eruption in Ecuador

Donna Rogers, the cruise ship passenger stuck in Norfolk, summed up the thoughts of most of our iReporters: "We had just bought a house and were doing construction and wanted to get away. We thought, stress-free -- all you have to think about is what bar and what time. And right off the top, something went wrong."