WASHINGTON (CNN) -- If your organization has the right stuff, it could display one of the U.S. shuttles that NASA plans to retire from service in 2010. 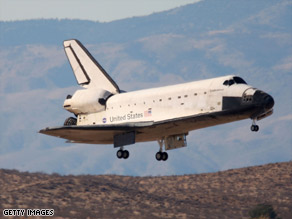 Space Shuttle Endeavour comes in for a landing at Edwards Air Force Base in California last month.

The space agency sent a notice this week to museums, schools and similar institutions to gauge their interest and qualifications for properly housing Discovery, Atlantis or Endeavour.

The shuttles are to be retired by September 30, 2010, but they won't be available until about a year later, NASA spokesman Michael Curie said Thursday.

"These are national assets, national treasures and something that NASA feels the public would want to see displayed publicly for years to come," Curie said.

Space shuttle Discovery already has been offered to the Smithsonian National Air and Space Museum in Washington.

"We have the information, and of course, we're thrilled to be considered for this artifact," said Claire Brown, director of communications for the museum. But no action has been taken at this point, and the institution doesn't have a plan for incurring the cost, she added.

The privilege of showing off a shuttle won't be cheap -- about $42 million.

This figure will include $28.2 million for the removal of hazardous chemicals -- such as ammonia, used as a coolant, and nitrogen tetroxide and hydrazine, used as fuel; $5.8 million for moving the shuttle via a carrier aircraft to its new location; and $8 million for preparing the shuttle for display, Curie said.

A carrier aircraft will be the only way to deliver a shuttle to a landlocked location, and such aircraft will no longer be in NASA's budget once the shuttle program ends.

After chemicals are drained from the shuttle, its estimated weight will be about 170,000 pounds, Curie said.

Whatever facility receives a shuttle must have experience in displaying space hardware and major historical artifacts, NASA said. The shuttles will be released without their engines, which, along with other components, will be offered separately. The deadline for responding to NASA is March 17.

NASA emphasizes that it will pay special attention to ensuring that the shuttles will retire to "appropriate places." The agency wants them to remain in the United States, and private collectors likely would not meet NASA's goal to have the orbiters and engines displayed publicly, Curie said.

"We really feel that these are artifacts that are important to the history of the country and that as many people as possible should have the opportunity to see them if they can," Curie said.

Asked whether NASA had considered trying to sell the shuttles on eBay, he laughed: "No, that probably wouldn't be the prudent thing to do with something paid for by taxpayers' money."

In January 2004, President Bush called for an eventual shift in focus from the space shuttle program to the new Vision for Space Exploration program, which NASA describes as "a sustained and affordable human and robotic program to explore the solar system."

Bush has said he wants astronauts to return to the moon by 2020. However, President-elect Barack Obama has a team reviewing options for the direction of space exploration.

CNN's A. Pawlowski contributed to this report.

All About NASA • Space Shuttles