NEW DELHI, India (CNN) -- India blasted into the international space race Wednesday with the successful launch of an ambitious two-year mission to study the moon's landscape. 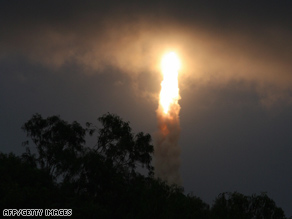 The mission seeks high-resolution imaging of the moon's surface, especially the permanently shadowed polar regions, according to the Indian Space Research Organization. It will also search for evidence of water or ice and attempt to identify the chemical breakdown of certain lunar rocks, the group said.

Despite the numerous missions to the moon over the past 50 years, "we really don't have a good map," said Miles O'Brien, CNN chief technology and environment correspondent. "The goal is to come up with a very intricate, three-dimensional map of the moon."