Asteroid to be harmless fireball over Earth

(CNN) -- A meteor, or shooting star, is usually the size of a pebble, or even a grain of sand, burning up in the atmosphere. 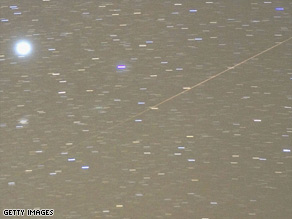 An asteroid like the meteor shown here should be visible Monday night over northeastern Africa.

On Monday night, an asteroid that may be the size of a car will likely burn up in the atmosphere over northeastern Africa, according to the Harvard-Smithsonian Center for Astrophysics.

But the planet is not in peril. The asteroid, spotted by an Arizona observatory only Monday afternoon, will burn up in the upper atmosphere at about 10:46 p.m. ET (2:46 a.m. GMT).

It will not pose a threat to aircraft or people on the ground, but it may put on a show.

Called an asteroid while in space, astronomers refer to it as a meteor once it interacts with the atmosphere and begins to heat and glow. While the meteor will burn up over Egypt and the Sudan, traveling from the southwest to the northeast, it could be visible from much of southern Europe, northeastern Africa, and the Middle East, according to Christine Pulliam of the Harvard center.

She said the meteor could appear, cloud-cover permitting, as bright as a full moon, and may produce a loud boom or popping noise. Italy's University of Pisa calculated the odds are between 99.8 percent and 100 percent that the object, traveling at 28,800 mph, will encounter the Earth's atmosphere.

"We want to stress that this object is not a threat," said Dr. Timothy Spahr, director of the International Astronomical Union's Minor Planet Center. "We're excited since this is the first time we have issued a prediction that an object will enter Earth's atmosphere."

"We're eager for observations from astronomers near the asteroid's approach path," said Gareth Williams of the Minor Planet Center. "We really hope that someone will manage to photograph it."

The Minor Planet Center, at the Harvard-Smithsonian Center for Astrophysics, is a worldwide clearinghouse for asteroid and comet observations. It collects and disseminates observations and calculates orbits.

All About Space Technology • Astronomy