(CNN) -- A team of scientists at Penn State University could be one step closer to bringing extinct species back to life. 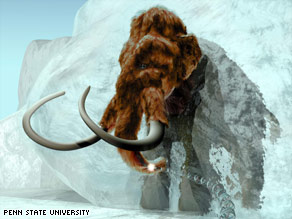 This drawing shows a prehistoric woolly mammoth linked to a strand of DNA and emerging from a block of ice.

Using next-generation instruments and groundbreaking DNA-reading techniques, scientists have uncovered much of the genetic code of the woolly mammoth, a prehistoric species of elephant.

The achievement could help scientists study why some species go extinct but others do not, and may even be useful in protecting other animals from extinction.

It also raises the possibility that scientists could use genome-wide sequencing to re-create an extinct creature.

"This really is the first time that we have been able to study an extinct animal in the same detail as the ones living in our own time," said Stephan Schuster, a Penn State University biochemistry professor and co-author of the research.

Project scientists have detailed more than 3 billion DNA building blocks of the mammoth, according to a study published in Thursday's journal Nature. This is still enough data to give scientists new understanding into the timing of evolution and the contributing factors that trigger extinction of a species.

"The team is searching the mammoth's genome for clues about its extinction," said study co-author and biologist Webb Miller. The million-dollar project is about 80 percent finished.

The project relied on hairs found on two frozen mammoth mummies that were buried in the Siberian permafrost for 20,000 and 60,000 years.

With mammoth hairs, scientists were able to avoid the bacterial and viral contamination they had encountered using bone tissue. The hair shaft encases the DNA like a biological plastic, making the genetic information less prone to environmental damage.

Finding and isolating the DNA was one thing, but sequencing the genome had its own challenges, scientists said.

"It's like a mirror that you smash on the floor. Then, like a jigsaw puzzle, you try to piece the DNA back together," Schuster said.

After scientists pieced together the broken pieces of the ancient genome, their analysis began. The genetic map of the modern African elephant was used as a blueprint to compare and contrast the genetic markers of the woolly mammoth.

The genetic data indicated that there were two distinct groups of woolly mammoths which separated about 2 million years ago. One of these sub-populations went extinct approximately 45,000 years ago, but the other lived until after the last ice age, about 10,000 years ago.

These two groups of mammoths were living in the same environment but were not interbreeding, causing low genetic diversity in their population. Miller and Schuster noticed that most of the mammoths they examined had far less genetic diversity than other species that are still alive, which may give clues into the biology of extinction.

Then there's the intriguing possibility of resurrecting a mammoth.

"By deciphering this genome, we could, in theory, generate data that one day may help other researchers to bring the woolly mammoth back to life by inserting the uniquely mammoth DNA sequences into the genome of the modern-day elephant," Schuster said.

"It could be done," he added. "The question is, just because we might be able to do it one day, should we do it?"

The team plans to finish sequencing the woolly mammoth's genome after the project receives additional funding.

All About Biology • Endangered Species • Genetics