(CNN) -- The ozone hole over Antarctica in 2008 is larger in both size and ozone loss than last year, but not as large as in 2006, the European Space Agency said Tuesday. 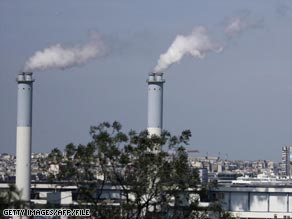 The hole is a thinning area in the ozone layer over Antarctica and the size of the hole varies every year depending on weather conditions.

The ESA announced its results based on information from German and Dutch researchers who analyzed satellite data.

Depletion of ozone is caused by extreme cold temperatures at high altitude and the presence of ozone-destroying gases, such as chlorine and bromine, in the atmosphere, the ESA said.

Those gases originate from man-made products like chlorofluorocarbons, or CFCs, which were phased out under a global agreement two decades ago but continue to linger in the atmosphere.

Ozone is a protective atmospheric layer found at an altitude of about 25 kilometers (15.5 miles).

It acts as a sunlight filter, shielding life on Earth from harmful ultraviolet rays that put humans at greater risk of skin cancer and cataracts and harm marine life, the agency said.