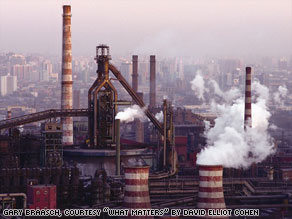 Capitol Steel is a major polluter of the Beijing area and a heavy coal user.

For a long time -- the first 15 years that we knew about global warming and did nothing -- there were no pictures. That was one of the reasons for inaction.

Climate change was still "theoretical," the word that people in power use to dismiss anything for which pictures do not exist. It is the reason we don't see shots of coffins coming back from Iraq; it's the reason the only prison abuse we really know about was at Abu Ghraib. Without pictures, no uproar; not in a visual age.

But now the pictures have started to come, and they will not cease.

Some show people: airlifted off the roofs of their houses in New Orleans' Lower Ninth Ward in the mad wake of Katrina, staring at their houses crumbling into the sea on the Alaskan coast, watching their graveyards flood on South Seas islands.

Some show the massive power of nature, made more massive by our injection of chemicals into the atmosphere: walls of flame crashing up Southern California hillsides, enormous waves breaking over Mississippi seawalls.

Some are almost clinical: the bathtub rings around drying reservoirs as evaporation takes its course.

And some have the stately, cold precision of the really big view: the satellite pictures, for instance, that show the steady melt of the sea ice above the Arctic Ocean. (They are like the before-and-after pictures from some makeover gone horribly wrong, the beautiful world disfigured by some out-of-control plastic surgeon.)

I think that these pictures -- many of them taken by Gary Braasch, who has chronicled this crisis more relentlessly than anyone else with a camera -- will someday be the iconic images of our decade, even more than the shots of the Twin Towers aflame, because they presage the images we will spend this century viewing -- on our screens, and out our windows.

They are the opening shots of a movie that will keep playing, with horrible relentlessness, for all our time on earth.

Hear Braasch describe his photos in an audio slideshow »

It's possible we'll have more terrorist attacks -- but it is not possible that they will pose the same threat to our civilization and to our planet as the steady horror now unfolding in what we used to call the natural world.

This is what the earth looks like now. Some things, of course, don't show up in pictures. To really understand what's going on, you need a split screen. On one side, there would be Tuvaluans in their sinking shacks, Bangladeshis in their flooding paddy fields, Inuits on their crumbling shores; on the other side, some Ford, GM and Toyota ads for monster SUVs.

When we say that this is a man-made crisis, we don't mean all men. We mean those of us, of both genders, who inhabit the rich world -- Americans make up 4 percent of the population but produce 25 percent of the world's carbon dioxide.

Even the Chinese, who have begun to burn lots of coal, can't compare -- that country's emissions matched ours in the past year, but there are four times as many people there. And we've been doing it for a hundred years. This one's on us.

You would also need a picture that somehow sums up the forces that keep us from doing anything about climate change. A stack of forty billion one-dollar bills 10,856 miles high might do -- that's how much profit ExxonMobil made in 2006, more profit than any other corporation in the history of corporate profits. It takes but a small fraction of that haul to buy the political juice that keeps Congress from acting responsibly.

But there are other iconic images emerging too, and some of them are much happier.Take the wind turbine, now the universal symbol for a future of green progress: those huge blades spinnin slowly against the Danish countryside, the German hills, the North Sea coast -- maybe soon against the backdrop of Cape Cod or the ridges of Vermont, if the opposition can be overcome (opposition rooted at least in part in an old set of iconic images of "unspoilt nature"). The breeze made visible, in a giant white wheel slowly turning from past to future.

And better yet are the pictures that show people rallying to the planet's defense -- a kind of immune system finally starting to kick in, hopefully before the sickness is too far gone. I've been thinking a lot about pictures like that, as I've made the transition from writer to activist. In early 2007, six college kids and I decided to see if we could launch a large-scale protest movement in the United States.

We set up a Web site, stepitup07.org, and started sending out e-mails asking people if they would organize protests 12 weeks hence. We had no budget and no organization, but we soon found a deep stratum of people across America haunted by global warming and eager to do something about it. Before many weeks had passed, they had organized 1,400 separate rallies in all 50 states, the biggest day of grassroots environmental protest since the first Earth Day in 1970.

We thought long and hard about how to make the most effective use of those rallies. And our answer was: pictures. We asked every organizer to upload a photo of their rally to our Web site before the big afternoon was out. And we encouraged them to think in visual terms.

By nightfall, we had a collage of images from across America. There was an underwater demonstration off KeyWest -- scuba divers hoisting signs in front of a coral reef that, like all its cousins around the world, will be destroyed unless we can bring the heating of the seas under control.

In lower Manhattan there were thousands of people in blue shirts holding hands and forming a "sea of people" to show where the tideline will fall across some of earth's most expensive real estate once seas start to rise.

On the glaciated peaks of the far West (which won't be glaciated much longer, as Braasch's pictures here make clear), alpinists made multiday ascents and then skied down in formation,webcasting as they went.

There were pictures from church steps and farm fields, California beachfronts and Louisiana levees, young people, old people, people of all kinds.

In fact, one of the very best pictures actually arrived at our Web site weeks early. It came from the Alpha Phi sorority chapter at the University of Texas at Austin, and it showed 180 sorority women -- with the broad smiles one would expect of Lone Star lasses -- holding a sign with our demand: Step It Up Congress: Cut Carbon 80% by 2050. They attached a note to the bottom: "We wanted to show it wasn't just the hippies who cared." That was both sweet and insightful. It's hippies who start things -- the kind of people who see the change that's needed a little earlier than the rest, who don't require the photographic proof in hand to start thinking subversive thoughts. But it's sorority chapters and

Chambers of Commerce and evangelical congregations who finish things off, move them into the political mainstream where they can't be ignored. These are steadier folk, and they rightly ask for some evidence -- evidence that we now can provide to all in great abundance. Al Gore's documentary, "An Inconvenient Truth," provided the first of those images to really make a deep impression, but now they appear every night. It's why polling shows that 70 percent of Americans understand the problem and want government to act. It's the reason there's some hope.

But that hope sits uneasily against the scale of the problem.This is a social issue unlike any other we've ever faced. It's not like the civil rights movement, much as we need a campaign as morally urgent and as passionate as that great uprising.

The civil rights movement knew it would triumph -- it knew it would go through hell, but it knew it would emerge. As Martin Luther King Jr. said almost every time he spoke, "The arc of the moral universe is long, but it bends toward justice." He knew eventually they'd win. But we don't have eventually. We have only now.

Our greatest climatologist, James Hansen, has given us eight more years to reverse the flow of carbon into the atmosphere, or else soar past the red lines that guard, among other things, the stability of the great ice shelves above Greenland and the West Antarctic. (If you want to imagine pictures of the future -- well, there's 25 feet of sea level rise in the ice above Greenland alone. Twenty-five feet!) Can we change that fast? It's not at all clear that we can.

In fact, the one thing that is clear is this: the next few years are a kind of final exam for the human species. Does that big brain really work or not? It gave us the power to build coal-fired power plants and SUVs and thereby destabilize the working of the earth. But does it give us the power to back away from those sources of power, to build a world that isn't bent on destruction? Can we think, and feel, our way out of this, or are we simply doomed to keep acting out the same set of desires for MORE that got us into this fix?

At some level, the answer depends on our imaginations. We can and will dream up new technologies -- we already have the windmill and the solar panel and the bicycle, all of which would help immensely. But we need a picture in our minds of the world to come -- a picture that shows a world more balanced, less careening. A world of farmers markets and trains, a world where 10 percent don't live high and 90 percent live low. A world almost, but not quite, beyond imagining.

Gary Braasch is a recipient of the Ansel Adams Award for Conservation Photography and a fellow of the International League of Conservation Photographers. He has documented the visible effects of global warming since 1998. His photographs have been published by the United Nations and have appeared in Time, Discover, Audubon, Smithsonian, Scientific American, Nature, National Geographic and other publications. Braasch's fourth book, "Earth under Fire: How Global Warming Is Changing the World," was published in 2007.

Bill McKibben, who wrote the above essay, is the author of a dozen books on the environment, most recently The Bill McKibben Reader, a collection of his essays. A former staff writer at The New Yorker, McKibben wrote "The End of Nature," the first book for a general audience about climate change. A scholar in residence at Middlebury College, he has worked with students to organize 2,000 demonstrations against global warming in recent years.