The smart money's on green

LONDON, England (CNN) -- Despite taking a beating from the credit crunch, the clean energy sector is being tipped as a golden opportunity for investors. 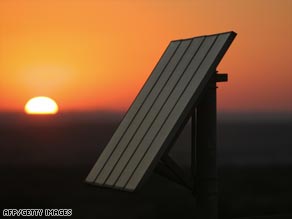 Alternative energy could be a golden opportunity for investors.

Governments around the world have set ambitious targets to cut CO2 emissions, but it's clear that if they are to meet those targets they will have to rely on the growth of alternative energy and the development of new technologies that promote energy efficiency.

The fundamental need for these kinds of technologies has meant that the clean energy sector has been one of the financial success stories of recent years. 2007 was a boom year with the alternative energy attracting $148 billion of new funding, up 60% on 2006, according to UK-based consultant New Energy Finance (NEF).

But since then the credit crunch has rattled the clean energy sector. The first quarter of 2008 saw the Wilderhill New Energy Global Innovation Index (NEX), which lists clean energy firms, tumble by 17.9%, nearly twice the loss suffered by the S&P500.

Worst hit has been the biofuels sector, which has been blamed for global food shortages and had its profits squeezed by high corn prices. U.S. biofuel firms VeraSun and Aventine Renewable Energy are down 61% and 52% respectively on last year. Hydrogen cell shares have also suffered.

But Eric Prideaux, Associate Editor at NEF, told CNN that growing policy support to reduce emissions, rising energy costs and increased competition for energy sources mean that clean energy will weather the storm better than other sectors. And there have been encouraging signs, with the NEX picking up by 6.2% in the second quarter of 2008.

While banks have had the jitters over the credit-worthiness of borrowers, clean energy firms have needed to look elsewhere to raise capital, but it seems that there has been no shortage of backers. Private equity and venture capital investors pumped $5.8 billion into the sector in the second quarter of 2008, up 66% on the same period last year, according to NEF.

Prominent venture capitalist John Doerr, who has previously funded the likes of Google, Amazon and Sun Microsystems, recently told the MIT Energy Conference that he believes we are at the beginning of a green-tech boom -- and with backers of his pedigree on board, he may be right.

So what are the best opportunities for the canny investor keen to cash in on alternative energy? Walter Nasdeo, Managing Director of Ardour Capital Investments, which produces the Ardour Global Alternative Energy Index, recommends spreading your risk in some kind of alternative energy "basket."

There are a growing number of exchange-traded funds (ETFs) that track various alternative energy indices. This means that rather than risking your money on one particular technology, you can hedge your bets on the performance of the entire index, making you less vulnerable to sudden shifts in the market.

When it comes to specific stocks, Nasdeo sees opportunities in the solar, biodiesel and wind sectors. He also sees cellulosic ethanol as a strong technology for the future. "The information we're getting in now is that if the markets correct themselves we may see some selling off of cellulosic ethanol IPOs (initial public offerings) mid to late next year, which would obviously bring the spotlight back to the biofuel market, and that's a positive," Nasdeo told CNN.

Wind energy has attracted the most investment in recent years and has proved reasonably resilient to the credit crunch.

Solar energy has been the victim of its own success, growing at an annual rate of 254% between 2004 and 2008 according to NEF, creating a mini bubble that was bound to burst.

Solar shares fell some 32% on the NEX in the first quarter of the year and have suffered again in recent weeks, a drop that Prideaux blames on proposals in Germany and Spain to cut generous feed-in tariffs that oblige utilities to buy renewable electricity at above market prices.

However, Prideaux added that "dramatic growth in the solar market is expected in Italy, France and Greece. Also, high profile acquisitions within the solar power value chain by large non-solar buyers -- Germany's Bosch and France's Schneider Electric are key examples -- have bolstered sentiment in [solar] shares."

Solar subsidies in the U.S. are also in doubt. A bipartisan group of 10 senators is currently pushing a compromise deal to renew the U.S. Investment Tax Credit. This would continue a subsidy to renewable energy that currently allows investors in solar projects to claim 30% off their investment tax bill.

The issue, which could be crucial to the development of the solar sector in the U.S., may not be resolved until there is a new administration in the White House.

Many involved in alternative energy, including Doerr and Nasdeo, feel that the new administration, whether Republican or Democrat, will be more receptive to alternative energy in general -- and that's good news for the whole sector.

So is the success of clean energy a flash in the pan, or does green-tech have a long-term future? Have your say. Sound off below

"When you look at the industries, and the companies that make up the industries, you're dealing with things in alternative, clean, renewable and sustainable energy that are of substance, that have markets that far exceed any other market in the world -- and these are actual operating companies," he says.

"Here we're making a product that is needed on a global basis and dramatically increasing in demand quarter over quarter, year on year."