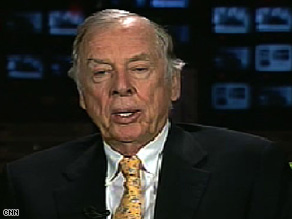 T. Boone Pickens talks about the advantages of wind power on CNN in May.

The legendary entrepreneur and philanthropist on Tuesday unveiled a new energy plan he says will decrease the United States' dependency on foreign oil by more than one-third and help shift American energy production toward renewable natural resources.

In a news conference outlining his proposal, Pickens said his impetus for the plan is the country's dangerous reliance on foreign oil.

"Our dependence on imported oil is killing our economy. It is the single biggest problem facing America today," he said.

"Wind power is ... clean, it's renewable. It's everything you want. And it's a stable supply of energy," Pickens told CNN in May. "It's unbelievable that we have not done more with wind."

Pickens said Tuesday that if the United States takes advantage of the so-called "wind corridor," stretching from the Canadian border to West Texas, energy from wind turbines built there could supply 20 percent or more of the nation's power. He suggested the project could be funded by private investors.

Power from thousands of wind turbines that would line the corridor could be distributed throughout the country via electric power transmission lines and could fuel power plants in large population hubs, the oil baron said.

Fueling these plants with wind power would then free up the natural gas historically used to power them, and would mean that natural gas could replace foreign oil as fuel for motor vehicles, he said.

Using natural gas for transportation needs could replace one-third of the United States' imported oil and would save more than $230 billion a year, Pickens said.

"We are going to have to do something different in America," Pickens told CNN. "You can't keep paying out $600 billion a year for oil."

His energy plan could be implemented within 10 years if both Congress and the White House treat the current energy situation as a "national emergency and take immediate action," he predicted.

Pickens, a lifelong Republican, says he is not advising either presidential candidate, but is prepared to work with the next president.

The Web site for the plan urges people to sign up and help spread the word.

"The best thing about it is that it's a definite plan -- it's not something that either party has pitted itself outrightly against. It therefore has a tremendous chance for success on Capitol Hill."

Analyst Fadel Gheit of Oppenheimer & Co. Inc., an investment firm, added that such a plan "has been on the drawing board for years."

At least 21 states and the District of Columbia have set deadlines or goals for utilities to obtain electricity from clean, renewable sources instead of fossil fuel-burning plants.

The scramble has triggered construction of large-scale wind farms throughout much of the nation, including proposals for the first U.S. offshore facilities.

Delaware and Galveston, Texas, have offshore projects in the works, although a farm proposed off New York's Long Island was shelved this year because of high projected construction costs.

In Massachusetts, where utilities are under the gun to obtain four percent of electricity from renewables by 2009, builders await federal approval of a hugely controversial wind farm off historic Cape Cod.

CNN's Emily Anderson and Thom Patterson contributed to this report.