Do we want to be citizens or customers?

LONDON, England (CNN) -- Joseph Rykwert is one of the world's leading architectural historians. He is currently Paul Philippe Cret Professor of Architecture Emeritus and Professor of Art History at the University of Pennsylvania. He has also authored several highly influential books including "The Idea of a Town" (1963) and "The Seduction of Place" (2000). 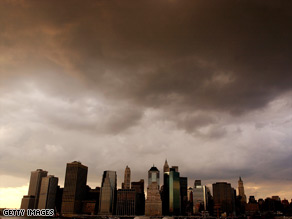 Storm clouds gather over Lower Manhattan. The New York skyline has been imitated in cities all over the world but never bettered.

CNN spoke to Rykwert about how buildings and spaces act as a metaphor for society, our transition from citizens to customers and the challenges facing the built environment in the 21st century.

CNN: What do you mean exactly when you talk about the city and its buildings as a metaphor for society?

Joseph Rykwert: One of the obvious things is that when a new big building goes up people immediately find nicknames for it -- the "gherkin" [30 St Mary Axe] and the "testicle" [City Hall, London]. And I'm told the big new building in Beijing [CCTV Tower] by Rem Koolhaas is known as a "crotch". So they are usually given nicknames of sexual connotations. And they're usually not favorable nicknames because people don't like anything new. One of the general considerations about new buildings is that people tend to say that anything new is a monstrosity. And then after a while they either accept them or they go on thinking that they are monstrosities. Reactions vary. This depends to some extent on the quality of the building.

But otherwise, there is that famous passage of Henry James looking at the skyline of New York saying; whatever it means, it means business. So that's certainly what the New York skyline is about -- the enormous energy of American business rising in the way that Chicago did and New York did.

But all that is now over and we no longer think of it in those terms at all. Skyscrapers no longer have that kind of power. Partly because there are so many of them and partly because we no longer believe wholeheartedly in the enormous energy of capital and business as a redeeming feature of our lives. I think we've grown a bit cynical about it, haven't we?

CNN: What is your assessment of the increasing prevalence of barriers and CCTV in public buildings and spaces today?

JR: I think it is a tragic development. I think it cuts a swathe out of public space. In a way, I think the American Embassy in London led the way but other institutions have followed. It has blocked off a bit of London.

Whether embassies are entitled to do that or not, I don't know. But it certainly presents itself as a fort or a castle. That's the metaphor that occurs to one going past it.

In a way, it suggests foreign domination in a way that embassies never did before. There are other embassies on the square and they are very modest by comparison.

The growth of security areas is something which is a reflection on our society. We are a frightened lot in a way that the people of the 1920's and 1930's were not.

This is not a British phenomenon, it is worldwide. You find gated communities in India and China perhaps even more than you do in England. Partly, of course, it's a feature of the unadvertised growing inequality in our society. But obviously it is a symptom of fear. It's also paralleled by the growth of the great commercial shopping centers which also cut up public space.

Behavior has to be conformable, conforming to. Everybody has seen The Truman Papers. I think that kind of conformity is something that is imposed by turning the citizen into a customer.

CNN: Do you think that this is set to continue?

JR: I hate prophesizing but I can tell you that I hope it doesn't. I don't know what will happen. But at the moment London is building the biggest commercial center in Europe, in Shepherds Bush. It is going to be gigantic. What it will do to the neighborhood I don't know. We shall see how it prospers. If it doesn't bring in the profits expected, then it will have a sort of blight effect on the area which is absolutely terrifying. If it is successful, and I suspect it will be, then it will certainly suck up a great deal of the energy that's going round in Shepherds Bush and make it unattractive.

CNN: Do gated communities and the like have any historical precedent?

JR: Well, tyrants always build castles to keep themselves safe in but on the whole citizens didn't. There's always been the sense that the more public the space the more safe it is. We can't really pretend that the desire for safety is our invention. But the desire for cutting off areas of the city because the city is generally seen as unsafe is a late 20th century phenomenon.

CNN: Are mixed-use areas are key to a city's success?

JR: Mixed use is what cities are all about. If you don't have mixed use you don't have cities. In the 1960's local authorities [in London] believed that high rises were the answer to popular housing. Only in one or two cases were there attempts made to make high-density low-rise housing. The most remarkable example of this was the Brunswick Estate. It is two stepped blocks of housing with a commercial area in between. It's very high density and was abandoned for a while because of rather peculiar renting and commercial considerations. About four or five years ago it was revitalized and now it's buzzing.

CNN: How do you view the increasing trend towards building "green" skyscrapers?

JR: I am all for greening tall buildings but I'm also very keen to note that greening a building doesn't cope with the problem of the tall building in the texture of the city.

I know that Mr Livingstone [former London mayor] was very keen on them but if you look at the ways tall buildings come down to the ground, it is always problematic. It has never been entirely resolved. It was fine in Chicago in The Loop when the buildings, as it were, absorbed the street. But even in New York it became problematic and in London even more so.

CNN: When did it start to become a problem in New York?

JR: If you look at the entrance halls of the skyscrapers of the 1920's and 1930's they are very welcoming. They are public spaces with enormous amounts of display and marble and so on. They were havens off the street. If you look at skyscrapers built in the 1960s onwards, they become tighter and tighter, less and less magnificent, as it were, towards the street, and more security bound. I think there is a change there in the way that the relationship to the street is perceived which is very radical.

CNN: What's your opinion on the rapid growth in places like Dubai? What sort of signals are they sending out?

JR: They're trying to send out the signal that they are doing something else. But, in fact, what they are showing us is that they are doing exactly the same. So I think it's a rather peculiar message. They are now trying to import cultural institutions to make the places vibrant in the way that western cities are but I don't quite see that it is going to work. I could be entirely wrong, but it seems to me that this is a very artificial growth in many ways. Like all new cities of this kind -- like Brasilia, for instance -- they depend on a separate serving space with very low paid operatives of many kinds -- cleaners, builders and so on. Brasilia is surrounded by a sea of these settlements.

Even a place like Celebration [in Florida] is dependent on a nearby low income village where all the service people live. There is always a kind of parody of the servant's space and the serving space and when the serving spaces overflow you have social problems of a major kind.

CNN: So movements like "New Urbanism" aren't the way forward in your view?

JR: I'm afraid it's part of the great move to make citizens into customers. They actually say so explicitly that they are not about citizenship they are about commerce. And when you go to Celebration it's very obvious because the town hall is rather small and relatively insignificant whereas the real estate office is a big tower. It's very striking. The metaphors are very clear.

Do you want to be a citizen or a customer? Have your say below.

All About Architecture • Capital Cities • Design