YELLOWSTONE NATIONAL PARK, Montana (CNN) -- The gray wolf was officially removed from the Endangered Species Act's "threatened" list Friday after three decades -- a decision that has stoked controversy among environmentalists and ranchers. 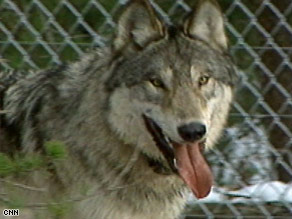 It means the wolves can be shot and killed once they step out of Yellowstone National Park as soon as the affected states establish a hunting season. However, state Fish and Wildlife officials can shoot the animals whenever they deem the wolves to be a problem.

The government delisted the wolves -- which were eliminated from Yellowstone decades ago before being reintroduced in the 1990s -- because they are now thriving in the park that is dominated by bison, elk and bighorn sheep.

"That's something to celebrate given their history of human hatred."

But not everyone is happy about the animal being removed from the endangered list. Conservationists believe hundreds of gray wolves straying from Yellowstone in search of prey could soon be killed by hunters and ranchers.

"We're not ready to pop the champagne corks and have a party," said Doug Honnold, the managing attorney for Earthjustice, a non-profit environmental law firm based in Oakland, California, that has threatened to sue the government.

"My biggest fear is we're going to go backwards instead of forwards."

It wouldn't be the first time. In the early 20th century, wolves were the targets of a massive government extermination campaign.

"It's harder to find an animal more persecuted than wolves. ... We did wolf extermination with a vengeance," said Smith.

But attitudes began to change in the 1980s. Elk and bison populations increased dramatically because there was no natural predator to keep their numbers in check. In 1995, Smith led a team to bring wolves back to the Rocky Mountain landscape. They transplanted dozens of wolves to Yellowstone from Canada.

The project has been regarded as an overwhelming success.

There are now more than 1,500 wolves across Wyoming, Idaho and Montana, according to the government. That number convinced federal wildlife officials to remove them from the endangered species list.

Federal officials require each of the three states to maintain a population of 100 wolves, meaning a total of 300 wolves across all three states. The states have actually pledged to keep the population higher than that, at a rate of 150 wolves per state.

"We did a thorough analysis," said Ed Bangs, the wolf recovery coordinator for the U.S. Fish and Wildlife Service. "The consensus [for recovery] is a population of 300 wolves and 30 breeding pairs."

Earthjustice says that's not nearly enough to ensure a viable population and they want to stop the delisting. "We're going to have hundreds of wolves die needlessly," said Honnold.

But many ranchers in the region just don't understand the fuss about the animals. They have complained for years that the wolves eat their livestock.

"There's nothing about a wolf that's sacred," said Bruce Malcolm, a cattle rancher and Republican member of Montana's House of Representatives.

He said he's lost nearly two dozen cows to the wolves in recent years. "I would have preferred that they never came here," he said.

If there's a winner with the controversy, it's Yellowstone. The wolves have pushed up attendance by more than a 100,000 visitors per year, according to a park study.

Smith, who has dedicated his life to the wolves, is philosophical about the debate.