LOS ANGELES, California (CNN) -- Many Americans are finding ways to trim their holiday budgets this year, but reports are showing that buying video games is one place consumers are not cutting back. 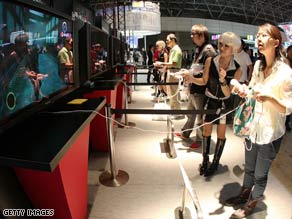 Through November, video game sales are up 22 percent over 2007.

According to market researcher NPD Group, U.S. retail sales of video games totaled $2.91 billion in November, a 10 percent jump from a year ago. Overall sales this year through November are more than $16 billion, up 22 percent from 2007.

Anita Frazier, an analyst from NPD, cites the industry's wide content variety on newer generation consoles such as Nintendo's Wii, Sony's Playstation 3 and Microsoft's XBOX 360 as a reason for the strong performance. Frazier also says that video games are a relatively cheap form of entertainment, considering the hours of value they provide.

"Video games can take between 10 and 40 hours, sometimes 50 hours, to complete" depending on the title, Helgeson said. "Gamers can often get two to three months out of one game."

According to NPD, some of the top-selling game titles in November include "Gears of War 2," which sold 1.6 million copies, and "Call Of Duty: World At War," which sold 1.4 million. Nintendo's "Wii Play" and "Wii Fit" put up impressive numbers, as well.

With those kinds of sales, video games have potential to be one of the most popular stocking stuffers for kids this holiday season.

Helgeson says that these days, games are a core part of being a kid, and it's no longer a question of "do you play video games?" Instead the question is "what games are you playing?"

"Ages, races, social groups -- video games cut across all platforms," Helgeson said. Whether you're shopping for a hardcore gamer or something for the family, "there is something for everybody."

All About Video Games