Film goes back to the future with 3D

By Chelna Khatau
For CNN

LONDON, England (CNN) -- In the future, viewing the world through rose-tinted glasses may not just be the prerogative of the naive. 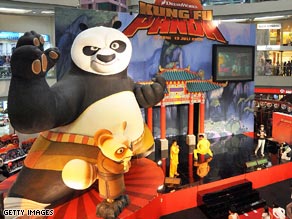 "Kung Fu Panda" producer DreamWorks will make all its animation in 3D from 2009.

Movie audiences will soon find themselves donning a pair of 3D glasses that will enable them to see animation films in higher definition.

But these aren't like the ordinary red and green cardboard glasses of old.

Also, the success of "Hannah Montana & Miley Cyrus: Best of Both Worlds Concert Tour," released this year in 3D, has only served to increase Hollywood's appetite for the technology.

"Kung Fu Panda," another one of this year's biggest hits got a huge thumbs up during a 3D screening at an industry event.

DreamWorks, the studio behind the animated film, has said that come 2009, most of its animated movies will be produced in the third dimension.

Directors James Cameron and Peter Jackson also have climbed aboard the 3D band wagon -- Cameron's "Avatar" is due out in 2009, while Jackson will produce "The Hobbit," with Guillermo del Toro directing.

Techno pundits and industry experts at the Intel Developer Forum (IDF), held in August were hailing 3D films as the next big thing.

At the forum, animation supremo and CEO of DreamWorks Jeffery Katzenberg, said 3D filmmaking was the "greatest innovation to occur in the movie business in 70 years."

So, what's all the fuss about? And for those who remember 3D the first time around, is it really anything to get excited about?

For RealD CEO Michael Lewis, likening the new-generation 3D to its old counterpart is like "comparing the space shuttle with the Wright brothers."

While MG Siegler, who writes on technology and digital media for California-based "Venture Beat," believes we will be able to live the experience. He is impressed with what Katzenberg had to show at IDF and believes 3D is here to stay.

Siegler, who is also behind Elite Tech on Reddit, told CNN: "I think for animation, it will be an important part. Companies like DreamWorks finally feel that technology is advanced enough to make it viable to make films from scratch in 3D. What do you think cinemas will be like in the future?

"I was in the crowd at IDF and even sitting near the back in a room filled with thousands of people, the clip Katzenberg showed of 'Kung Fu Panda' in 3D was pretty amazing. It looked great, but the new 'Monsters vs Aliens' film trailer they showed off looked arguably better."

Siegler believes that the technology could advance so much over the next 10 years that glasses will not even be required to view 3D elements on screen.

But not all films will get the 3D treatment in future, just as only a few blockbusters, like "The Dark Knight," get the IMAX treatment, largely because of the high production costs, he argues.

The film industry is clearly banking on the technology to lure back moviegoers to the cinema screens as they shun it for computer screens.

As the options for bringing movies over the Internet into the living room grow bigger with devices like Apple TV, Vudu, Roku and the Xbox 360, Kaufman argues that "consumers will watch movies more and more using sites (like Netflix,) downloading films to desktops."

Experts say that eventually the disc formats (DVD and Blu-ray) will give way to fully digital distribution, similar to the way music is now downloaded via iTunes.

But theater owners are fighting back against the technological onslaught that threatens their trade.

This means 35mm film reels will ultimately disappear and pictures will become sharper. Digital projectors will be able to produce images that trick the eye into perceiving depth.

Similarly, cinemas are reinventing themselves as entertainment hubs, with gourmet dining, live entertainment and even pampering sessions.

Easily transportable, it combines "cutting-edge technology and deluxe comfort and creates a new melange of bar, restaurant and theater."

Audiences will be seated on a bed lounge of sorts, and as the lights dim after a gourmet dinner, the viewer can either watch the film seated, or horizontal, in which case a second "view horizon" is activated.

A version of this idea is already being implemented by the U.S.-based National Amusements, which has theaters across America, the UK, Latin America and Russia.

Last year, they introduced "Cinema de Lux" by bringing to the cinema hall luxury dining, an exclusive Lux Level VIP lounge, a bar, and in the auditorium, cushioned love-seats with moveable armrests and swivel dining trays.

Looks like the days of sitting in a darkened room, munching on popcorn, are definitely over.