LONDON, England (CNN) -- On any given day amidst a backdrop of buses, buildings, cars and construction sites, Richard Reynolds can be found bent over pulling weeds, planting flowers or maybe even trimming some shrubs. 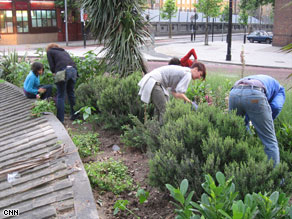 Guerrilla gardeners cultivate what was once a patch of derelict land in London.

Sometimes he does it in the morning or in the early afternoon. Often he goes out in the middle of the night because, he says, it's calmer then, with only him and the plants and the city lights and the stars -- and also because, in the darkness, he's less likely to be arrested for digging up land that doesn't belong to him.

"I have been stopped by the police and threatened with arrest, which was very depressing," said Reynolds. "They insisted I stop, which I did, but I went back an hour and a half later and finished off the job."

Reynolds calls himself a guerrilla gardener -- a horticultural warrior who fights battles with flower bulbs instead of bombs to try to reclaim urban turf that has been neglected or altogether forgotten and beautify it back into green space for the enjoyment of all.

The first piece of land he conquered was a tiny bricked-in plot outside the entrance of his apartment building in the London Borough of Southwark. It was filled with nothing but compacted dirt, trash and weeds. "Presumably at one time it had been beautiful," Reynolds told CNN.

He then moved onto bigger beds (that also didn't belong to him) down by the street, venturing out at 2 a.m. with fistfuls of flowers for residents to find afresh in the morning. "I felt like Father Christmas or the Tooth Fairy," he said.

And now, four years after Reynolds planted the first illegal seed, a grassroots guerrilla gardening movement has sprouted up around him, with thousands of revolutionaries throughout the world who are armed and ready with rakes and shovels to turn areas of urban decay into springy patches of peonies and sunflowers.

Watch Richard Reynolds and his guerrilla gardeners in action. »

In London alone, Reynolds has led dozens of covert digs with hundreds of flower-empowered followers to transform derelict dirt on street corners, roadways and roundabouts into places of rediscovered horticultural beauty -- one of his favorite projects, Reynolds says, is a lavender field planted in a once-barren median on Westminster Bridge Road.

Other avant-garde gardening clubs operate in cities like Paris, Berlin, Tokyo and New York, where the Green Guerrillas, one of the first guerrilla groups, was founded by artist Liz Christy in 1973.

"I really think it is kind of a win-win situation," said Reynolds. "The authorities or whoever owns the land is getting it improved if it is neglected."

Most of the time, the guerrilla gardeners' gardens are gardens of peace unless, of course, landowners decide they don't want them there, which, with the exception of an angry bar owner in east London, usually never happens -- a spokesperson for London's Metropolitan Police Service said that while he had never heard of the seed-sowing bandits, any criminal activity -- even illicit gardening -- is discouraged and would be subject to prosecution.

Yet on increasingly common occasions, local governments and landowners have actually legitimized some of the illegal flower patches, granting their gardeners permission to plant them and thus rendering them no longer guerrilla.

This happened with Esther Jury's moonlight gardening in abandoned beds around her tower block in the London neighborhood of Islington. After arranging a meeting with her residents association, Jury was given the (green) thumbs up to continue working the land and just last year, her apartment complex was recognized by Britain's Royal Horticultural Society for its exemplary blossoms.

See images of Esther Jury's gardens and others. »

Reynolds has also received permission to plant tiger lilies, poppies or whatever other flower he wants in the beds below his tower block in Southwark. "It is now an official sort of public community gardened voluntary space," he said. "Long may it last."

Other covert horticulturalists have even inspired local residents to get involved in the greening.

On Andy Beauchamp's street in the notoriously irritable south London neighborhood of Peckham, for example, almost every single doorstep is dressed with flower-filled planters and over-flowing window boxes after Beauchamp decided one day to start sticking plants in front of his neighbors' homes.

Much to his pleasant surprise, many of his neighbors started to care for them and even began adding more. Now the tiny residential row has garden parties and other get-togethers along with bumblebees and birds.

"It is greener and in many ways a lot safer," said Beauchamp. "You are unlikely to get crime in a place that looks attractive."

A similar story has sprouted on Sean Canavan's street near Camden Market in north London where, almost a decade ago, Canavan began planting Busy Lizzies and hollyhocks underneath all the cherry trees that line his road.

Canavan does most of his digging in the dark -- not because he's trying to hide but because he's almost completely blind and the sunlight hurts his eyes. He took up gardening after losing his sight because, he says, it was the only thing he could find to do that made him feel good.

"It has given me a lot of confidence in myself and makes me feel useful and worthwhile," he told CNN. "It gives me a purpose and is something I enjoy."

Now on any given day, Canavan can be found with his guide dog Khara walking up and down his street carrying water jugs to his Busy Lizzies and hollyhocks. And sometimes on warm breezy summer afternoons like this one, he pauses to see if he can see what he has grown.

"I don't know what color those flowers are," he says while stopped in front of a giant hollyhock that has taken two years to grow. "Are they yellow? I like the yellow ones."

Are you a guerrilla gardener? What green makeovers have you given your neighborhood or city? Share your gardening stories in the Sound Off box below.