(CNN) -- "If power plants, waste handling, chemical plants and transport systems were located in wealthy areas as quickly and easily as in poor areas, we would have had a clean, green economy decades ago." -- Majora Carter, Powershift 2007 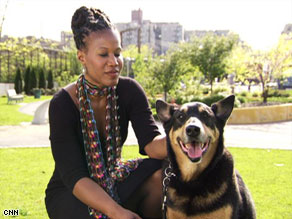 Majora Carter grew up in the South Bronx at a time when America's cities were emptying into the suburbs. Many of the buildings in her neighborhood were abandoned by the time she was ten years old. Landlords were burning their buildings to collect the insurance; light manufacturing industries were moving out of the Bronx; and waste facilities were moving in to take their place. As pollution rose, asthma rates, poor health and unemployment soared. To outsiders, those who were left were branded with the stamp of the ghetto: as Carter says, "If you lived here you were no doubt a pimp, a pusher, or a prostitute."

As a child, Carter spent much of her time planning her escape. "Education was my way out," she reveals. She studied cinema studies and film production at Wesley University then signed up for graduate school at New York University. To save money, she moved home to her parents.

Of that time, she says, "It felt like a defeat but it was also the best thing in the world to happen to me because I got reacquainted with my community."

Carter saw that her neighborhood -- under-served, ignored and literally dumped on -- needed to fight a positive campaign to assert itself as a vibrant community.

"People wanted things like clean air, they wanted safe places for their kids to play where they wouldn't get hit by a truck," she tells CNN. "They wanted living wage jobs that didn't degrade the environment or kill them."

What is environmental justice?

She fought a vociferous campaign against a planned waste facility that would have seen 40 percent of New York's municipal waste coming to the South Bronx. "We were already handling 40 percent of the city's commercial waste here," she says.

In 2001, after the defeat of the scheme, Carter founded the non-profit environmental justice solutions corporation, Sustainable South Bronx. Its central tenet is that people shouldn't have to move out of their neighborhoods to live in a better one.

While walking her dog one day, Carter stumbled upon a disused stretch of waterfront. That inspired her to write a tenacious $1.25 million Federal Transportation planning grant for the South Bronx Greenway. The 11-mile-long stretch is the first new South Bronx waterfront park in over 60 years and provides alternative transport, recreational space, jobs and environmental enhancements to the local community.

In 2003, Sustainable South Bronx started an urban green-collar training scheme. Many of the course's graduates were formerly incarcerated; all were receiving some form of public handout. The scheme now boasts an 85 percent employment rate, in areas like urban forestry, brown-field clean-up, green roof installation and maintenance.

Ultimately, Carter would like to see her organization "worked out of a job." She believes that, with the right partnerships, the South Bronx could be transformed into the thriving neighborhood her parents once knew.

Carter has now handed the day-to-day management of Sustainable South Bronx to her colleagues, allowing her to spread her messages of environmental justice and regeneration through green industry to others.

"We've got to decide that we want to live in a world that is sane and happy and healthy, and that everyone deserves that," she says.