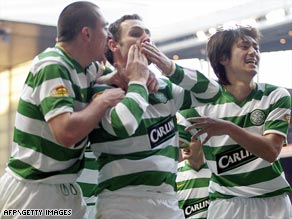 Defending champions Celtic were determined to set the record straight after an early-season 4-2 home defeat and McDonald delivered the decisive blow after 57 minutes.

Georgios Samaras's flick-on was met by McDonald and he beat goalkeeper Allan McGregor with a superbly struck volley from just inside the area.

The home side had the ball in the net after 11 minutes when Kirk Broadfoot bundled home in a packed goalmouth, but referee Craig Thomson had spotted a foul on keeper Artur Boruc and ruled out the effort.

Instead it was Celtic who later almost added a second when Paul Hartley's free-kick found Samaras at the back post and McGregor just managed to hold the downward header.

"Losing at home hurt us quite a lot, so we wanted to come here and take a bit of revenge." McDonald told Setanta Sports. "Our first win (at Ibrox) in three years - it's a fantastic feeling."

It was the Ibrox club's first domestic home defeat in 2008 and Celtic manager Gordon Strachan recognized: "They have had a good year Rangers, fantastic year, especially at home. For us to come here and to get a victory is very satisfying."

The Dons striker hit his seventh goal of the season when he volleyed home Scott Severin's freekick.

Marius Zaliukas was sent off in a fiery second half for elbowing Andrew Considine when a melee broke out in the Aberdeen penalty box.

A 22nd-minute strike from Scott Robertson was enough to give Dundee United all three points against Falkirk.

Porter scored twice in the first half and completed his treble in the 78th minute, the exact time last year when the late skipper collapsed against Dundee United.