Just who exactly are CFR Cluj?

LONDON, England (CNN) -- They may be well known in their domestic leagues, but in terms of international football, Anorthosis Famagusta and CFR Cluj-Napoca are something of a mystery. 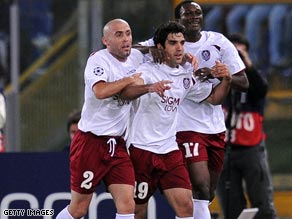 After Cluj's startling victory away at Roma a lot of people are asking who this club are.

Their names, however, will now be well known to Roma and Werder Bremen fans, after the smaller clubs recorded remarkable upsets against the more experienced European giants.

In the opening fixtures of this season's Champions League, Famagusta went to Werder Bremen, who finished second in the 2007/8 Bundesliga, and recorded a 0-0 draw; while Romanian side Cluj pulled off a stunning 2-1 victory away to Roma.

So, now we know their names what else can we find out about Europe's latest giant killers? We have compiled a list of interesting facts about the teams and the towns in which they play.

The club is based in the city of Larnaca in Cyprus, which has a population that was recorded in 2004 as 117,124, and is said to have been founded by Noah's grandson, Kittim.

Larnaca has Cyprus' main international airport on its doorstep and it is estimated that a fifth of the city's houses are holiday homes. The city is also famous for its picturesque seafront.

The city has a salt lake, which is regularly visited by flocks of flamingoes, which makes it a popular spot with bird watchers. Larnaca's patron saint is St. Lazarus, who, according to the New Testament, was brought back to life by Jesus.

The club is making history as the first Cypriot team to make it to the group stage of the Champions League; they did this by defeating Olympiakos 3-0 at home to win 3-1 on aggregate.

They have won the Cypriot league seven times in the last 15 years, and have played in the group stages of the UEFA Cup in past years.

Traianos Dellas -- The Greek international defender may be a little older than most of his teammates, but he still has a lot to give, and offers valuable maturity to a team that may struggle to perform at such a high level. Dellas scored the goal that secured Greece a place in the Euro 2004 final, which they went on to win.

Savio -- Another more mature player, the former striker who plays on the wing for Famagusta also brings the top flight experience the team may be lacking. He has featured in the Brazilian national side, and was part of the Real Madrid squad that won the Champions League in 2001.

The club's home town is the city of Cluj-Napoca, which -- with a population of 310,243 -- is one of Romania's largest cities. The city is based in the area of Transylvania, made infamous in Bram Stoker's "Dracula."

The name Cluj comes from the Latin word "clausa," which means closed and refers to the hills that surround the city. The city has six state universities, including Romania's biggest, and has the country's largest student population.

Cluj has been developing a healthy music scene in recent years, with a growing pool of techno acts, not to mention being the home of the band "Sistem," who came third in the 2005 Eurovision song contest with their song "Let Me Try."

The city is also the proud home of Romania's best selling beer, Ursus. As well as being popular, Ursus is a big name in the country's football, sponsoring the national league between 1998 and 2004 and the Romanian Cup, which is now named the Cupa României Timisoreana, after one of its brands.

It is also the location of the Transylvania International Film Festival, which is held annually and has been running since 2001.

The club are playing under a new manager this season, the Italian Maurizio Trombetta, and have brought in new players, including the Burkina Faso international Yssouf Koné and former Argentina U-20 international Gustavo Oberman.

They won the Romanian Cup last season, becoming the first club based outside Bucharest to win the title in 17 years.

Juan Culio -- The Argentine midfielder has stamped his mark on the competition already, scoring both of the goals in the team's victory in Rome. Joining the club in 2007, the 25-year old is rumored to be seeking Romanian national status, something the national coach must be excited about.

Ioan Ciprian Deac -- Home-grown talent, he is a youngster who has been generating some interest in Romania, having played for the national U-21 team and being selected in the provisional Romania squad for 2008.