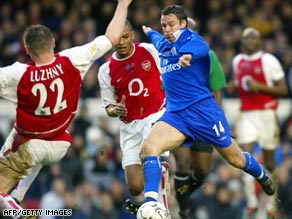 Graeme Le Saux, pictured here playing for Chelsea, endured homophobic abuse throughout his career due to false rumors he was gay.

Don Riddell: Graeme, you're happily married with two children but during your football career everyone thought you were gay and the experience was pretty miserable.

Graeme Le Saux: The culture of football back in the 80s was very different, something I found very hard to relate to and subsequently I found myself a little bit isolated and ostracized from certain people.

That eventually led to rumors being spread that I was gay. In the context of modern life that's not defamatory but in terms of the dressing room culture that existed then -- and to an extent now -- it was very difficult for me to deal with and had the potential to damage my career.

I think that the joke very quickly got out of hand. And I think where I was at fault was that I was probably a little sensitive about it, because I could actually see the potential of this sort of thing to get out of control. And it did. We played in a game at West Ham and the terraces started singing something particularly defamatory about me and I remember being, you know, really, really shocked that it got to that level so quickly.

DR: And that carried on as well and the most notable incident is the one involving Robbie Fowler. Tell me about that?

GS: It all culminated in a game that we played at Stamford Bridge against Liverpool and Robbie Fowler, he stood in front of 40,000 people and he bent over and invited me to perform a homosexual act upon him... That's the politest way I can put it!

That really was the point at which it couldn't get any worse. It wasn't just people singing on the terrace, it was a colleague -- an international colleague -- humiliating you in front of all those people, an international audience. He will maintain to this day that it was just a laugh but that is exactly the point. If you look at anything like this, whether it is racism or homophobia or whatever, as if it is just a laugh that can be a very serious issue. I'm all for a good laugh but when you offend someone and you are damaging relationships then it goes way beyond being a laugh and you can't hide behind that as an excuse. Does homophobia in soccer exist? Have your say

DR: It's thought that only one professional soccer player in the world has ever declared himself to be gay. That was the Englishman Justin Fashanu and he committed suicide a decade ago. John Amaechi became the first gay player to be associated with the NBA last year, but such declarations are extremely rare. In many cases homosexuality remains pro sport's last taboo.

GS: It's such a terrible reflection on a sport that has so much positive impact across the globe that there is still this issue about gay people within the sport. If you look at so many other professions in terms of business and politics, across the board the gay community is represented but in football it still isn't and I find that disappointing. There may not be many gay players in the game but the sport should be grown up enough to be able to support those people in the football environment.

DR: Football's obviously made great strides, certainly in Britain, in the last 10 years with regards to racism, but how much prejudice is there generally in the game? Do you think we'll ever be free of it?

GS: I think there's always going to be an undercurrent of prejudice. But ultimately I think it's important for any business really to be responsible, inclusive and representative of its employees. And football is in a very privileged position and can lead by example. And so I hope that, you know, the people in authority really make some serious attempts, I suppose to create parity between all walks of life.

DR: We've come across a couple of black footballers who say that fans who shout racist abuse aren't really racist, they are just trying to put us off our game. How much do you buy into that approach?

GS: Well, I can't speak for individual black players! But sometimes I think the perception of people it is not happening to is different to the individual.

It used to baffle me when I first started playing that you'd have Chelsea fans being racist to black players from the opposition but there would be three or four black players on the Chelsea's team. And if you spoke to them or confronted them about it, they would be like, "Oh yeah, but we know them... they are, you know, they are fine." And it's like, well how do you pick the bones out of that? Because there is just no logic.

But then you know prejudice is built on ignorance. You know it really is. I think that sometimes you know individuals have to take responsibility for themselves and actually take a step back and look at what they are doing and not use ignorance as an excuse and say, "Well, would I like to be on the receiving end of this sort of abuse?"