Eto'o: We can't wait until a black player gets killed

(CNN) -- As a player who has won African and Olympic titles with Cameroon and Spanish league and Champions League titles with Barcelona as well as three African footballer of the year awards, Samuel Eto'o expects to command respect. 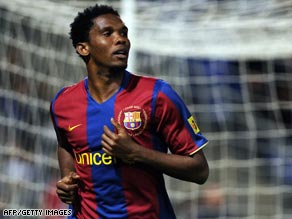 Barcelona star Samuel Eto'o is one of a number of top footballers who have spoken out against racism.

Yet Eto's spectacular career in Spain, where his goalscoring prowess have made him one of the world's most feared and admired strikers, has been punctuated by incidents in which he has been the victim of sickening racist abuse.

Memorably, Eto'o started to walk off the pitch in protest during a match at Real Zaragoza in 2006 after being taunted by home supporters chanting monkey noises only to be persuaded to return by his Barcelona teammates and the club's coach, Frank Rijkaard.

"I was leaving the field and if it wasn't for Rijkaard, my teammates and the referee, I would have done it," Eto'o recalls. "In that moment you start thinking whether there is something wrong with being black, you know? But I think we are all humans, everyone's blood is the same color and we all have the same heart. I don't see any differences in skin color."

While Spanish football's reputation for sophistication and flair has made la Liga one of the most attractive and marketable competitions in world football, attitudes in the stands have not always kept apace with the cosmopolitanism on display on the pitch.

Nor has positive leadership always come from the top. Real Zaragoza were fined just 9,000 euros ($13,800) for the abuse directed by their supporters at Eto'o. And in 2005, the Spanish national coach Luis Aragones -- currently steering Spain through Euro 2008 -- was at the center of controversy when he used a racist slur to describe French striker Thierry Henry, now a teammate of Eto'o's at Barcelona.

Eto'o admits that racism is so widespread in Spain that he no longer dares take his family to matches.

"Racism can happen anywhere and I don't want them to see it," he told CNN. "It's a sad situation in football. In my opinion the problem is getting bigger and the people that should come up with a solution are not doing it. So to protect my family, I don't take them to the game."

"The authorities are working to find solutions. But they must find them. We can't wait until some crazy fan jumps from his seat and kills a black player before measures are taken. The players are revolted by it and we try to help each other. But the authorities must find a way to set an example."

One of the saddest aspects of racism in football is that many of those who participate in taunting colored players would never dream of behaving the same way on the street, at work or at home.

But Eto'o fears attitudes in stadiums may reflect wider social attitudes which find expression amid the passion, emotion and anonymity of the football crowd

"Football stadiums are just a reflection of what is going on in society," Eto'o says. "Many times in stadiums people just feel more relaxed and say what they think when they're somewhere else."

He believes the Spanish media has a key part to play in tackling racism in football, not just by highlighting incidents of abuse but in creating an environment in which racism in the stands is no longer quietly condoned.

"I don't make the decisions, but something needs to be done. Right now, the media here pays attention to the incidents of racism, but doesn't discuss solutions. That's the tragedy. They use these images to create an impact rather than to identify racism as a problem and to urge people to find a solution. TV has a lot of weight on public opinion and what the industry must do is make people feel a social responsibility to stop this kind of behavior."