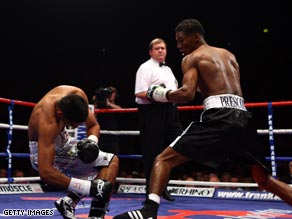 Khan's rise through the professional ranks comes to a halt as Prescott strikes in the first minute.

Khan was on the canvas twice before the fight came to a swift close at the MEN Arena in Manchester.

While Prescott moved a step closer to world title contention Khan had cause to reflect on his defensive frailties exposed during the brief passage of his first defeat after 18 professional victories, 14 inside the distance.

In his previous bout Khan had been floored for the third time as a professional by fellow English boxer Michael Gomez.

It had been hoped that his defensive abilities had been strengthened by new trainer, Cuban Jorge Rubio, but that idea was soon shattered by Prescott.

Khan confessed that he had not heeded advice from Rubio about Prescott, who was a proven puncher who had halted 17 of his 19 opponents.

"I just got caught with a big shot," Khan told a news conference on Sunday.

"I knew he had speed and was powerful. I will have to see where I'm going wrong but I will be back stronger.

"We worked on stuff in the gym and Jorge said not to do that because he's a big hitter, but sometimes I let my heart rule my mind.

"Every fighter wins and loses in his career and I'm going to come back stronger. Jorge is the man to help me do that definitely. He's a great trainer.

"He's a big banger in the first three rounds. I fight with my heart but now it's going to be about using my brain. I got beat in the amateurs and came back stronger.

Promoter Frank Warren is planning for Khan to return to action on December 6.