NEW YORK (CNN) -- Kenneth Cole is the first to admit he has a bit of a language problem. 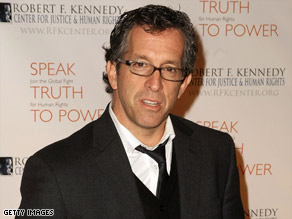 "I need to distort not just leather and fabric, but also words," he said. "It's a disorder I have."

The pun-loving fashion designer has raised plenty of eyebrows with advertising copy that ranges from the provocative and the political to the lighthearted and cutesy.

Browse his online store and you can buy a T-shirt that reads "In war is it who's right, or who's left?" A canvas tote bag says, "Use me again and again and again ... (I'm used to it)."

Should you purchase either product, you're assured that all your money will go to Cole's "Awearness Fund," an initiative designed to draw attention to social issues like homelessness and AIDS.

To that end, Cole has just released a new book called "Awearness: Inspiring Stories About How to Make a Difference" (DK Adult). It's a collection of essays from influential types intended to encourage readers to get involved in service and volunteerism in their communities.

Former President Bill Clinton contributes a piece on the global fight against HIV/AIDS. Actress Rosario Dawson writes about empowering young Latinos to vote, and cyclist Lance Armstrong discusses the merits of starting a movement like Livestrong, his effort to energize the fight against cancer.

The book commemorates 25 years in the fashion business for the New Yorker, as well as a quarter century as an advocate for social activism.

Cole spoke to CNN about the book, the belief, his wife and the cover. (OK, so not everyone is brilliantly punny.) The following is an edited transcript of the interview.

CNN: What is the big message you're hoping to get across with this book?

Kenneth Cole: The message is that these are extraordinary times. They're transformative in so many ways. And America recently expressed the reality that there is an appetite for meaningful, significant, social change like we've never seen before.

CNN: In the introduction of your book, you talk about how you've met a lot of people who have inspired you. Is there one person who stands out above the rest?

Cole: There are so many people that inspire me, and there are 90 role models in this book, some of whom I've been very close to. I am the closest of all to my wife, who is in and of herself a change agent and has committed to impacting the realities of homelessness -- and making sure I get out of the house every day to do what I have to do. So she's inspired me and she's done great stuff. So I think I'll stay with that answer.

CNN: In Robert Redford's essay on freedom of speech, he encourages the use of humor when speaking out about a cause someone feels passionate about. Has humor helped you?

And I think we also have these walls around us, and when people disagree, we're inclined not to listen, but to a degree you can break through that wall often with humor. Jon Stewart has shown us how to do that, as have some other people who are in the art of doing it well.

Cole: He has already surpassed my greatest hopes. I think he's created a sense of spirit and energy and opportunity in this country that we've never seen. And I think it has transformed, in a sense, who we are as a nation globally within 24 hours. We saw that happen.

CNN: How does a successful fashion designer, who also has a big conscience, feel in a weak economy?

Cole: I think it's an extraordinary opportunity. There are only so many things we can do that make us feel better. We pick up the newspapers and we want to cry every day. We turn on the news and we want to jump out the first window, jump in front of the first truck. And there's not a lot you can look forward to right now ... but you can make yourself look better, and if you look better, you'll feel better, and it becomes self-fulfilling. I think fashion can do that to you.

You can do it with some older stuff and mix it with newer stuff, or you can just do new cool stuff by a new cool American designer (smiles). And starting from the ankles down, and then up.

CNN: Do you think that fashion gets a hard rap? [Are] people too quick to write it off as frivolous and underestimate its power?

Cole: I've struggled with that over the years. Is fashion relevant? Is it frivolous? Is it trivial? Because I give so much of my essence to it, as do everybody I work with.

I've come to two conclusions. One is that it's as relevant as anything, because most of the people you encounter in a given day don't get to know anything more about you than how you appear. You're making a very thoughtful statement ... so I think fashion is important.

So I think it's relevant, and for me it's been an extraordinary resource for me to do so much. And I love fashion. I think it makes us feel good. And if you feel good, we do good.

All About Rosario Dawson • Robert Redford • Fashion and Style