(CNN) -- Ted Turner appeared Tuesday on CNN, the network he founded, to talk about last week's election results, his business ventures, and his relationship with ex-wife Jane Fonda. 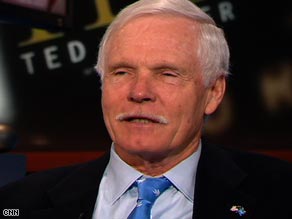 Turner is promoting a new autobiography, "Call Me Ted" (Warner Books), which documents his life, loves, successes and failures.

Probably best known for his 1980 launch of CNN, the first 24-hour all-news cable network, Turner has also made news as a philanthropist and supporter of the United Nations. He won the America's Cup of yachting in 1977, and owned the Atlanta Braves when they won the World Series in 1995.

Turner discussed the book on CNN's "American Morning." The following is an edited transcript.

CNN: Let me ask you first of all, before we get involved in the actual book and the story of your life: What do you make of the results of this presidential election?

Ted Turner: Well, I'm encouraged. I think we needed change that we can believe in.

Watch Turner talk about his relationship with ex-wife Jane Fonda »

CNN: Is [President-elect Barack Obama] the guy to pull this economy?

Turner: Well, I don't know. I mean, our country in my lifetime has never been in this shape before. So we'll have to see. I think we are really heading into uncharted territory. But I think the main problem is, I hope he doesn't get blamed if things get tough -- because I think they are going to.

Turner: Well, I don't think so. It was a struggle financing CNN, but I did it without ever asking the government for a nickel. In fact, I gave the government $32 million when they were a little short and couldn't pay the dues to the U.N.

CNN: A lot of people in this economic community losing an awful lot of money, something you know something about.

Turner: Maybe I did, but I was on a board of directors and a founder, and I was concerned about the AOL merger, but we didn't know that the books were cooked. We didn't do enough due diligence.

CNN: Was that the worst business decision of your life?

CNN: If you could go back and do it again, would you have just completely called the whole thing off?

Turner: Well, I couldn't have. At the time, there was so much momentum to do the deal, everybody was for it -- all of Wall Street and the management of both companies. And I wouldn't -- we could have stopped it if we had known of the accounting irregularities. But we didn't know. So there was no way to stop it.

CNN: At about the same time, you were hemorrhaging money at the rate of about $10 million a day over the course of more than two years, your marriage to Jane Fonda broke up. And many people close to you were concerned -- because your father, who passed off his billboard business to you, committed suicide -- that you may follow him down that road.

Turner: I wouldn't do that to my children and grandchildren.

CNN: But they were concerned about it.

Turner: Well, they might have been concerned about it, but there was no reason to be.

CNN: You went through counseling, though, to try to come back. What was that road like?

Turner: What, counseling? I've been in all kinds of counseling. I believe in doctors. Where I really spent the time was in couples and marriage counseling. It helped some. I was married for 10 years one time and 18 another.

CNN: ... Jane Fonda has said, and said in the "60 Minutes" interview that aired over the weekend, that she still loves you. Is there--

Turner: She didn't say that.

CNN: Well, she says that she would be at your side in a blue minute.

Turner: If I needed her.

CNN: I would assume that somebody wouldn't do that unless they love you.

Turner: It was nice of her to do.

CNN: Any chance for a reconciliation?

Turner: I don't think so, but you never know.

CNN: What would it take?

Turner: I don't know. More than a television interview.

CNN: Have you thought about picking up the phone?

CNN: She said that -- this is a quote from the interview -- she said, "It's impossible to really be with Ted the way he needs someone to be with him and have any kind of life of your own." Are you tough to live with?

Turner: I travel a lot. I'm on the move.

CNN: Why are you on the move so much?

Turner: I don't know. I just got in the habit of it because that's how you get a lot done. Going from here to Philadelphia, and from Philadelphia to Atlanta, and Atlanta to Chicago, and Chicago to Los Angeles. When you are promoting a book, you really move.

CNN: Why would people say that?

CNN: It's been a while since you have been involved with CNN. When you look --

Turner: No, I'm involved every day, because I watch it just about every day.

CNN: ... When you come here and see how it's grown up, you see the international aspect of it, you see that on Election Night, CNN -- Wolf Blitzer, Anderson Cooper, Campbell Brown, John King --

Turner: They did a good job.

CNN: They beat the networks. What do you think what you see that?

Turner: I think it's great.

CNN: This is the little entity that you started out of nothing.

Turner: It's not so little. And it wasn't when we merged with Time Warner, either. Was the world's most important network.

Turner: Well, I'm still promoting the book. It just came out two days ago. So that's a lot of work.

CNN: ... [The book describes your] getting stuck on a sandbar, getting caught in a storm, almost dying off the coast of Cape Hatteras. ... How did you go from being a sailor that got stuck on the reef and almost died to somebody who managed to win the America's Cup on the Courageous?.

Turner: Well, the same way in baseball, [the Atlanta Braves] set a record for consecutive last-place finishes in divisional play in baseball. First four years, we finished last, four years in a row. But I stuck with it and after 18 years, we won the World Series. And that's what I did with sailing.

CNN: Just stick to it?