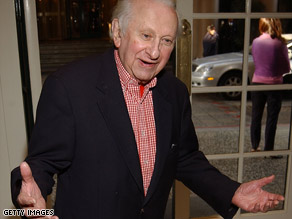 Pulitzer Prize-winning author Studs Terkel died at his home Friday at the age of 96.

Terkel had grown frail since the publication last year of his memoir, "Touch and Go," said Gordon Mayer, vice president of the Community Media Workshop, which Terkel had supported.

"I'm still in touch, but I'm ready to go," he said last year at his last public appearance with the workshop, a nonprofit that recognizes Chicago reporters who take risks in covering the city.

"The last time I saw him, he was up, about, and mad as hell about the Cubs," workshop President Thom Clark said in the statement.

Terkel, known for his portrayal of ordinary people young and old, rich and poor, won a Pulitzer Prize in 1985 for his remembrances of World War II, "The Good War." iReport.com: Remebering the legacy of Studs Terkel

Terkel was born in New York but moved to Chicago, where his parents ran a small hotel. Terkel would sit in the hotel lobby watching droves of people arguing, fighting, ranting and telling stories.

"That hotel was far more of an education to me than the University of Chicago was," Studs told CNN in 2000.

It seems that beginning would pave the way for Terkel's love of passing on people's oral histories. He could often be found behind a tape recorder talking to the people who would eventually become the basis for his books. Terkel became famous, if not synonymous with oral histories, for his ability to cast a light on the working class.

"Oral history preceded the written word," Terkel told CNN in 2000. "Oral history is having people tell their own stories and bringing it forth.

"That's what history's about: the oral history of the unknowns that make the wheel go 'round. And that's what I'm interested in."

In an interview with Lou Waters on CNN in 1995, Terkel spoke about his book "Coming of Age," which explored the lives of people who have been "scrappers" all of their lives. Inside the book are the stories of people between the ages of 70 and 95, a group he called "the truth tellers."

"Who are the best historians? Who are the storytellers?" Terkel asked. "Who lived through the Great Depression of the '30s, World War II that changed the whole psyche and map of the world, a Cold War, Joe McCarthy, Vietnam, the '60s, that's so often put down today and I think was an exhilarating and hopeful period, and, of course, the computer and technology. Who are the best ones to tell the story? Those who've borne witness to it. And they're our storytellers."

After Terkel's wife died in 1999, he began working on a book about death, eventually called "Will the Circle Be Unbroken? Reflections on Death, Rebirth, and Hunger for a Faith."

"It's about life," Terkel said in 2000 when asked about the project. "How can one talk about life without saying sometime it's going to end? It makes the value of life all the more precious."

All About Studs Terkel • Chicago