ATLANTA, Georgia (CNN) -- In Salman Rushdie's new novel, "The Enchantress of Florence," the exasperated Mughal emperor Akbar the Great agrees to let a mysterious Florentine adventurer, Mogor dell'Amore, finish a tale. But as the troublesome Mogor prepares to continue, Akbar says with a touch of venom: "A curse on all storytellers. And a pox on your children, too." 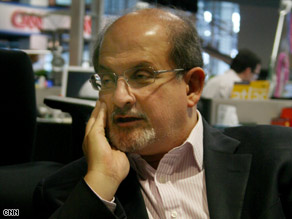 Salman Rushdie's more interested in trying "to find stories to tell about how the world joins up."

It wasn't so long ago that the Indian-born author was a hunted man, placed under guard in an undisclosed location, because of an Islamic edict, or fatwa, against his life issued by Iran's Ayatollah Khomeini. All for telling a story -- 1988's "The Satanic Verses."

Some radical Muslims believe the fatwa, declared for what they believe was blasphemy against Islam, remains in effect despite Iran declaring it lifted. That a book could be grounds for assassination is a belief that some Westerners routinely invoke -- particularly in these war on terror times -- when boasting about the superiority of Western culture.

Yet Rushdie explores the parallels between East and West in "The Enchantress of Florence" (Knopf). He observes the two sides have much in common, good and bad.

"You always try to make a strength out of the cards you're dealt," he said in an interview. "Since my life has been this very transcultural life, it's pretty obvious that that has gone a long way towards giving me a subject.

"One thing I've seen ... is that these different worlds [of East and West] are not so separate as we think them to be, they bleed into each other all the time. What happens in one part of the world affects what happens in the other in a way it may not have hundreds of years ago, but it sure does now. ...

"So it seems to me more and more interesting to try to find stories to tell about how the world joins up and what happens when it does."

"The Enchantress of Florence" is set in the 16th century, its locales primarily divided between the Renaissance cradle of Florence and its rich Eastern counterpart, the Akbar-founded city of Fatehpur Sikri.

Among its mix of real-life and fictional characters are Akbar, known for his love of learning and religious freedom; Mogor, who stowed away on a Mughal-bound ship and saves himself by bonding with Akbar; Niccolo Machiavelli, the Florentine author of "The Prince" who is portrayed as Mogor's friend; and the mysterious empress Qara Koz, a Mughal royal who has links with both Akbar and Mogor.

There are also knowledgeable prostitutes, jealous concubines and walk-on roles for the Medicis, Amerigo Vespucci and Girolamo Savonarola.

Through history, magical realism and legends, Rushdie establishes bonds between his subjects: the repressiveness of Savonarola's Florence and pre-Akbar India; how characters are defined by their journeys, or lack of them; the influence of women on male-dominated societies; how knowledge flowers, or shrivels, based on a willingness to communicate. The parallels with the world today -- and elements of Rushdie's life -- are obvious.

Watch how his knighthood met with protests »

The book has earned wildly differing reviews, with most praising Rushdie's lush language but others criticizing his curlicued plot and female characters.

"It's not exactly autobiographical, but it's certainly material that has been something I've inevitably had to think about," he said. "And we all think about these issues a great deal. This may have been my particular subject for five minutes, but it's everybody's subject now."

Rushdie adds there's a natural friction between rulers and artists.

"Both are people trying to describe the world as they wish it to be," he said. "Very often those visions of the world clash. As long as there have been writers, there have been tensions between thinkers and rulers."

Rushdie has his own tensions to deal with. "The Satanic Verses" made him a household name; with fame has come regular coverage in the British tabloids, particularly after Rushdie married and then divorced "Top Chef" host Padma Lakshmi. Among the tabloids' terms for the 61-year-old author was "literary playboy." Rushdie doesn't mind attention, but bristles at that kind of attention.

"What I mind is ... I am, by nature, quite a private person, and I mind when my private life becomes a public property," he says. "That has been difficult."

(His friend, "Atonement" author Ian McEwan, called the gossip "an occupational hazard," according to the International Herald Tribune.)

Still, Rushdie said, he can't complain too much: "Most writers have to labor in much more difficult circumstances," he said. Starting with his second novel, the Booker Prize-winning "Midnight's Children" in 1981, "[My career] has brought me a broad base of international readers. ... I was just lucky."

If "lucky" seems to be an odd word for Rushdie to use given some of the ensuing circumstances of his fame, he observed he has much to be proud of. In the last month alone, he formally received the knighthood granted him by Queen Elizabeth, and "Midnight's Children" was named the greatest of Britain's Booker Prize winners.

He's even indulged in acting, with appearances in the films "Bridget Jones's Diary" (playing himself) and Helen Hunt's recent "Then She Found Me" (as a physician).

For the former member of Cambridge University's Footlights troupe, getting to scratch what he calls "my other itch" has been a pleasure -- especially when he won the "Then She Found Me" part over a friend who is a professional actor.

He's also spent time teaching. His visit to Atlanta included a stop at Emory University, where he has placed his archive and is serving as a Distinguished Writer in Residence.

He teaches a course in contemporary world literature, where his students have to adjust to being taught by the eminent Sir Salman: "What happens is, when they show up the first seminar, there's about 15 minutes when they're scared of me. But it doesn't last long. It becomes a straightforward academic exchange."

What Rushdie longs to do, however, is get past the book tours, the tabloid headlines -- the extraneous stuff, he says. The joy of "The Enchantress of Florence," some of which he pursued while going through his divorce, was in the writing.

"It was nice to finally get back to being a novelist," he says.