After the election, news as usual?

ATLANTA, Georgia (CNN) -- Public Broadcasting Service President and CEO Paula Kerger called Wednesday on news organizations to work to keep Americans engaged in the political process, even though the presidential election has ended. 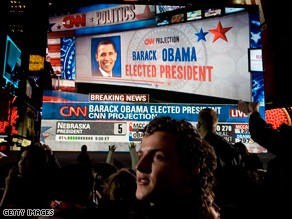 "What do we do now?" she asked, reprising the line that Robert Redford asked his political consultant at the end of 1972's "The Candidate," after compromising his principles to win an election.

"We should be asking that," Kerger told an audience at a talk sponsored by the Atlanta Press Club.

New approaches in journalism -- especially television journalism -- are needed to keep the interest of the electorate, 133 million of whom voted in last month's elections, from flagging, she said. Unprecedented interest in the election helped whip "the body politic back into shape after years of listlessness," she said.

"The question is, will it last?"

Kerger, who was named to the job in 2006, called for news organizations to reject news as entertainment and to go beyond headlines to give their readers and viewers analysis and context.

That will not be easy, she predicted. Having treated the political campaigns as dynamic narratives, essentially "as another TV reality show," news organizations have conditioned the public to tune out now that the campaigns are over (everywhere but in Minnesota), and the governing is set to begin.

"Once the last contestant is voted off the island, the story's over," she said, summing up what she said is the view of many.

But the transition from a Republican administration to a Democratic one gives news organizations an opportunity to do more, she said, citing President-elect Barack Obama's selection of Timothy Geithner as secretary of the Treasury Department.

"What is it?" she asked rhetorically about the department. "Why is it important? We must give the news they need."

She criticized the fact that "few news organizations" produce original content for the Web, and said that simply moving television to the Internet "doesn't work" in the 21st century.

"The world moves at the speed of broadband, and if we can't keep up, we are going to get left behind," she warned.

Kerger cited a Columbia Journalism Review story that said traditional journalists are in danger of being bypassed by the more than 70 million blogs and 150 million Web sites that currently exist, with thousands more being added hourly.

And that doesn't include the 210 billion e-mails that are sent each day.

"Now that information is so plentiful, there has never been a greater need for analysis ... context," she said.

She concurred with Jan Schaffer, the executive director of the Pew Center for Civic Journalism, who has called for journalists to add to their traditional role of watchdog the job of guide dog.

"Encourage people to get involved, get engaged, take ownership of problems," Kerger told the journalists.

"In the information age, the public needs guide dogs as much as watchdogs."