(CNN) -- The rapper Common wants to take hip-hop in a new direction, he says, and he has an unsuspecting ally -- President-elect Barack Obama. 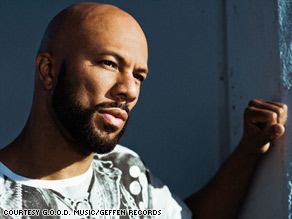 Common says he was looking for a new sound on his eighth album, "Universal Mind Control."

"I really do believe we as hip-hop artists pick up what's going on in the world and try to reflect that," he told CNN, outlining his belief that mainstream as well as so-called "conscious" rappers -- the more socially aware -- will pick up on what he sees as the more optimistic prospects of an Obama presidency.

"I think hip-hop artists will have no choice but to talk about different things and more positive things, and try to bring a brighter side to that because, even before Barack, I think people had been tired of hearing the same thing," he said.

Likewise, "Universal Mind Control," with its hook-heavy, synthed-out tracks, represents a "broadening" of hip-hop's audience -- one that demands evolution rather than hackneyed revamps of old beats, rhythms and rhymes, Common said.

Listen to clips from the album and Common's interview with CNN.com »

Not that Common, born Lonnie Rashid Lynn Jr., is altogether removed from the temptations of his hip-hop brethren.

He serves as a spokesman for Lincoln Navigator and purports on his new album to "rebel in YSL," a reference to designer Yves Saint Laurent. Money is also a weakness, as Common -- No. 14 on Forbes magazine's 2008 list of richest rappers -- regularly invokes the greenbacks he makes and spends.
iReport.com: Talk Grammy Awards and more showbiz with Todd

Still, Common has come at hip-hop from a different angle from many of his colleagues. He was generally considered "underground" until he linked up with Kanye West, who produced his albums "Be" (2005) and "Finding Forever" (2007).

Lyrically, violence has never been his thing; soft-drug use has been mentioned but rarely glamorized; he removed homophobic references from his lyrics years ago; and while there have been hints of misogyny and the occasional N-word in his verses, neither has been a staple of his rhymes.

"I've always been conscious, honestly," he said. "I made a choice on this album, 'Universal Mind Control,' to really make some music that was bright, that would be a little more lighthearted, just because of what was going on in the world." Read more from the interview

With a few exceptions, his latest lyrics are consummate Common. In his beat poet's cadence, the 36-year-old rhymesmith aggressively courts the ladies, personifies hip-hop, aggrandizes himself and his hometown (lovingly, "the Chi"), and respectfully doles out props to hip-hop's forefathers -- most notably to Afrika Bambaataa on the album's title track.

The album's sound, however, is atypical, moving -- sometimes jerkily -- from club-banger to anthem to ballad to Top 40. The latter even runs counter to the opening verse of "Everywhere": "No pop, no pop, no pop, no pop/We gonna do this thing till the sky just drop."

But the sound is part of "a whole new sound and a new movement" in hip-hop, something he explored out of disdain for repetition and predictability, he said. That might explain Kanye West's relative absence on "Universal Mind Control."

The Louis Vuitton don appears on only one track, the pop-drenched "Punch Drunk Love." But West has long been credited, even by Common, with bringing his fellow Chicagoan to the mainstream after "Be" and "Finding Forever" went gold and leapt up the Billboard 200.

Of course, it's not all Kanye, said Common.

"I'm a true believer that it all boils down to the music, because Kanye can endorse something, and if people don't like it they ain't gonna get with it -- regardless of whoever endorses it," he said.

He compared his working relationship with West to the collaboration he enjoyed with The Neptunes' Pharrell Williams on "Universal Mind Control." Williams, whom Common casually likened to Quincy Jones, pushed him lyrically, much like West did, he said.

Between Williams and Mr. DJ -- who composed backbeats for some of OutKast's biggest hits -- Common arrived at the evolution he sought, he added.

Common also is plotting a change, or at least a detour, in his career path. Though his past cinematic endeavors have been primarily gangster flicks, Common has landed a role in the upcoming "Terminator Salvation" and could play Green Lantern in "Justice League: Mortal" should the derailed movie get back on track.

"I would truly love to go increasingly in the acting direction," he said. "My goal is to be a movie star. I want to be at Will Smith's level. I want to be co-leading with Leonardo DiCaprio."

Fear not, Common fans. The aspiring thespian is confident he can pull off both, though hip-hop might ride sidecar to the silver screen. Acting, he said, seems to improve his music.

"I don't take as much time overthinking it. Actually, since 'Be' I've been working on films and each album has been expanding and increasing, so I feel like I would still make music, but it wouldn't be the main gig," he said.

Selling albums, Common said, is about more than good music, and though he stands proudly by the music he made pre-West, he concedes he didn't do enough to claw his way up from the underground.

"After you make good, quality music, then it's your job to go out there and promote it and to market it and to get it out there to the people. I feel like I wasn't doing that early on," he said. "Now I am, and I feel like I'm growing as a songwriter and working with producers that are very incredible, so I feel all that is contributing to me getting the recognition that I'm getting."