NEW YORK (CNN) -- Yet another scale Il Divo has mastered: scaling the heights of success. 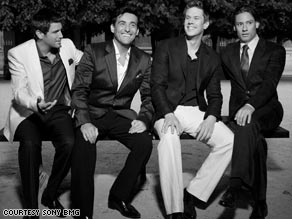 The quartet was formed in 2004 after a global search.

The operatic quartet's new album, "The Promise," debuted atop the UK charts, their third collection to hit the No. 1 spot.

The album (which was released in the U.S. last Tuesday) features Leonard Cohen's "Hallelujah," Frankie Goes to Hollywood's "The Power of Love," and the traditional "Amazing Grace." Il Divo also takes a chance on the ABBA hit "The Winner Takes it All."

The group is the brainchild of "American Idol" judge Simon Cowell, who saw a potential market for an international, "popera"-style act after the soaring success of the Andrea Bocelli-Sarah Brightman duet "Time to Say Goodbye (Con te Partiro)."

According to Syco Music, Il Divo's UK-based label, the quartet has sold more than 22 million albums worldwide. It seems Cowell knew what he was doing.

CNN caught up with Il Divo to find out how close they are to Cowell, and which American pop diva they dream of collaborating with.

CNN: Who do you most get compared to, the Three Tenors or the Backstreet Boys?

Carlos Marin: (laughs) It's a mix of everything. I mean at the end [of the day] we are just a pop act. We just sing pop songs, and we just converted mostly the big endings into operatic style. But we are just us, Il Divo.

CNN: Are you surprised by how much of a hit you've become?

Marin: In a way, yeah. I still remember the first time we went to number one (in the UK). We knocked out Robbie Williams and it was just like "Wow!"

CNN: What is the big appeal of Il Divo?

Urs Buhler: I think it has a lot to do with the big variety we have inside the group, the fact that we are all from four different countries, from different cultural music backgrounds. And we bundle all those different energies ... and bring it together for that one cause -- to make the most beautiful music that we possibly can together. It's not like we have a strategy or recipe for it, it's just that we're passionate about what we do. It works somehow. It's magic.

CNN: How involved is [Simon Cowell] with the day-to-day Il Divo operation?

Buhler: With the day-to-day operation, I would say his involvement is next to nothing. He's only involved in the actual A&R-ing and the executive producing, which means we meet him about twice a year for an hour.

CNN: You took a lot of time off in 2007. In fact you took nearly the whole year off. When you regrouped did you find anything was different?

David Miller: Absolutely. The first three years were just a roller coaster of experiences: having the number one in the UK and then that turning into the number one in all the different countries, and going all around the world and being on tour, being on tour with Barbra Streisand and then more albums. Everything kind of bled into everything else and we didn't really have any time to appreciate all the things that we had done.

CNN: When you're standing on stage and you look out at the audience what do you see ... is there a certain age range, a certain sex?

CNN: How many languages do you sing in?

Buhler: We [sing] in French, Latin, Italian, Spanish, Portuguese, English ... that would be six. And we speak about seven or eight.

CNN: Do you speak the language of love?

Buhler: That would be the ninth language.

CNN: Who is the biggest diva in the group?

Marin: We are really four divas. Four captains, one ship.

Sebastien Izambard: We have very strong personalities, and we're the producers of our tour and we sit down -- the four of us -- and decide what we're going to do, what set, what choice of the music or lighting. We're four grown-up people and we make that very possible. [In the beginning] everyone had their own opinions. Now we just know what's best for Il Divo. It's easy. Everything's easy.

CNN: How are you being received in America?

Miller: I think in America it's more of a slow burn. I think it's more difficult to put us on the radio because we fall between the cracks in a way. We're a little bit too pop for the classical stations, we're a bit too classical for the pop stations. And right now hip-hop and rap sort of reign supreme on the airwaves. But there is a big following and it's growing all the time.

CNN: If there was someone you could collaborate with who you haven't yet, who would it be?

CNN: These are all pop acts. So you really do want to stay within the pop realm?

Buhler: Yeah, definitely. I mean that's a very conscious choice. I don't think we're all opera purists, but for me personally, a "Nessun Dorma" [Puccini aria] is as good as it is and I don't see the point of adding a breathy voice, or adding harmonies to it. While the pop repertoire ... it's just more out there for everyone to take it and do with it whatever without offending people. All you want to do with a pop song is somehow transmit emotion.

So far there's [been] much more freedom in pop music and that's why we stay in there ... we pretty much can do whatever we want. And as Simon Cowell just said recently, "Nobody owns music."