NEW YORK (CNN) -- Joan Baez is in a celebratory mood. And rightly so: She's survived 50 years in show business. 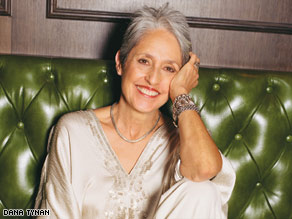 Joan Baez says that her new Steve Earle-produced album was meant to sound like a throwback to the folk era.

The legendary singer, who rose to fame during the folk movement of the 1950s and 1960s, is marking the occasion with a new album called "Day After Tomorrow." Produced by Steve Earle (whom Baez likes to call "Mister Gruff"), it's a collection of bluegrass-tinged songs reminiscent of her early repertoire.

Earle penned one of the album's standout tracks, "God Is God," which he describes as "recovery speak." Baez also covers "Scarlet Tide," a song written by Elvis Costello and T Bone Burnett for the 2003 film "Cold Mountain."

At 67, Baez finds her voice may not have the sheer power it did in her 20s, but her political spirit is intact. She passionately expressed her support for Barack Obama during the presidential campaign, the first time the self-described pacifist has taken sides in party politics.

"I haven't heard an orator like that since King," she said. Baez knew the Rev. Martin Luther King Jr. and famously sang the protest song "We Shall Overcome" to a massive crowd at the Lincoln Memorial during King's 1963 March on Washington.

Baez spoke to CNN about sustaining her voice and finding happiness in her 60s. The following is an edited version of that interview, which was conducted before Tuesday's election.

CNN: What did Steve Earle bring to the table with your new album?

Joan Baez: Oh, everything but the voice. Spirit, some songs. His gruffness to my non-gruffness. He worked fast, really fast, and I like that. And he brought the musicians. I don't know who to choose for musicians. We were a good match.

CNN: Is there a song on the album that speaks to you more than others?

Baez: I guess the ones I go back listening to are "God Is God" and "Rose of Sharon." "Rose of Sharon" sounds exactly like an old folk song. I wouldn't have guessed in a million years that it's contemporary.

CNN: How does it feel to be embarking on a new tour at such a politically charged time?

Baez: I've never seen this country this politically charged. I realized something this morning. I was watching Obama on TV and I thought, "I really love this guy." I love what he's capable of, I love that he's genuine. He's a statesman, and he's brilliant. People say do you think he can change America? He already has. ...

And I know most of the things he'll have to do I would battle him to the death. He's going to be commander in chief of the Army, Navy and Air Force, and I'm a pacifist [laughs].

CNN: So you would almost prefer that he didn't run for president, that his talents could be applied in other ways?

Baez: Yeah. I've thought that, yeah. Part of me wishes very strongly that Obama would be outside the system and his hands would be less tied.

CNN: In the '50s and '60s, you lived and breathed the causes you rallied behind. When you look at young musicians today, do you feel they're attaching themselves to charities or causes because it's hip, rather than meaningful?

Baez: I think it's probably a combination of things. I think people are afraid of risk so they'll [only] go so far. But I don't think people have felt the urgency that we felt in the '60s. But it's there. The urgency is there. There's a need for community, but we don't feel it.

CNN: Why is that?

Baez: That we don't feel it? Because we live more and more separately. Kids are walking down the street plugged in [to personal electronics]. The only place there's community really is in the ghetto, where they need each other and they know it. We need each other, and we don't know it.

CNN: You look back at all the causes you've rallied behind, and there have been so many. ...

Baez: It makes me dizzy.

CNN: [Do] you feel emotionally wrung out?

Baez: No. It's the opposite. What happens is it starts generating energy for myself.

There's some part of me that's wiped out. I feel that sometimes.

CNN: Do you find you have to work harder to keep your voice in shape?

Baez: Oh God, yeah. It was very humiliating to find out that I was like everybody else in the world and that I had to get coaching. And now it's a real issue. I have to do [vocal exercises] every day, especially on tour. It's pretty exhausting.

And as the years went by and as the therapy went on I was holding together. And then at around 50, I decided to fall apart and find the pieces and put them back where they should've been. And I did. And I did what I thought was impossible, which was really drag the stuff up, look at it, go through all that and then each time I did that ... it became a daily thing with the therapist ... to find out something huge. Go through the terror, go through all of it and then by the end of the week something had changed a little bit. This went on for a number of years.

So I am now in a stage nothing like where I was before then. There's no stage fright now. Just the joy of singing.

CNN: You're happy being single, aren't you?

Baez: Yeah. After all I've been through, I don't want to risk [pats her heart]. I mean I feel so extraordinary, so much better. And you know if something walked into my life that feels right ... the question is, am I ready to see it or not? I'm sure it's wandered by me a few times. But at some point maybe I'll be ready to see that in which case it would be a good thing. ...

[In] Buddhism there's no real happiness without the struggle. But the struggle has to defeat you in a way [before] you get to be like the Dalai Lama. You know those monks all giggle? All the time! They've got it figured out. Because things are what they are on Earth, and you be as good as you can, and you die, it's the next life. So what's the big f****** deal?