(CNN) -- Global activist and U2 frontman Bono attended the United Nations General Assembly in New York to push world leaders to join his ONE campaign in fighting disease, poverty, and hunger. He talked to CNN's John Roberts on "American Morning" about recent successes and what's next. 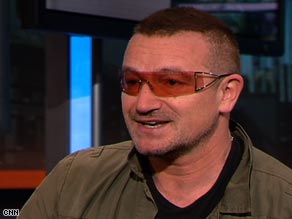 ROBERTS: All this talk has been about the economy collapsing, $700 billion bailout. Congress is absolutely absorbed with that. Did that in any way affect what you were trying to do this week? Are people more focused on this economy than in helping out developing nations?

BONO: We got good news this week. I know normally I'm on your program with bad news -- the whingeing rock star -- but it's great. There's a disease, malaria -- it's 3,000 African kids die every day of mosquito bites. Sounds mad, but it's true. And people have committed and it looks like the funds are on the table so that that disease will be no more by 2015. That makes people like me punch the air and everyone who wears a ONE T-shirt and all our white band campaigners on college campuses all over the country -- it was a great day for them yesterday so we're celebrating that. I know it's extraordinary, that while you're having this meltdown on the markets, that people could even concentrate on this stuff, but I'm really grateful that they did. We had both [presidential] candidates make very powerful statements about the necessity for nonmilitary tools, for instance, in foreign policy. This is an America that both candidates want to show to the rest of the world -- the greatness of America.

ROBERTS: So you're hearing what you want to hear from these candidates?

BONO: Yeah. And you couldn't imagine a few years ago that you would have candidates so close to an election talking about this stuff, so yeah.

Watch Bono say how he uses his star status on politicians »

BONO: We wouldn't be asking for that kind of money. These are serious matters, people have lost their jobs. But I think the bill for the whole world -- so America would be like a third of it -- for $25 billion you could absolutely change the world. You could put kids in school, most kids in school. You could eradicate diseases like malaria, as we're saying. We could change the water supplies. But what's important is that people who want to change the world, want to see their country, they see it as a patriotic act to show the world innovation of America, technology of America, pharmacology of America.

ROBERTS: For $25 billion, you could put every kid who's out of school in the world into school? That seems like a lot of people for $25 billion. Pretty good return on your investment.

BONO: It's a great return on investment. You heard me on your program before talking about debt cancellation. Strangely Americans don't know that because of debt cancellation there are already an extra 29 million African children in school. That's incredible. Because people got out on the streets on the (RED) campaign and stuff like that, there's now 2.5 million Africans on AIDS drugs, which are expensive. So your country is turning for me in the right direction on these issues.

ROBERTS: So you're hearing some of what you want to hear, particularly on the malaria issues. But the European Union had promised to increase aid by $50 billion between 2005 and 2010. It looks like they're going to fall $40 billion short.

BONO: They are, but they're still ahead of America. That's the bad news. You don't want to get me into the ring.

BONO: We've had meetings with Sarkozy this week as well as talking with McCain and Palin and as well as always talking with the Obama campaign. We do keep up the pressure on the Europeans, but the Europeans are way ahead of America on aid, just to put it in context. But you're right. They're not coming through on all of it. We will torture them too. That's our job.

ROBERTS: You talk a lot about these United Nations Millennium Development Goals. Let me go over a couple of those. It was supposed cut global poverty in half by the year 2015. Universal access to HIV/AIDS treatment by 2010. Begin to reverse the incidence of malaria by 2015. How far along that road are we?

BONO: The Millennium Development Goals are in a bit of trouble. It is astonishing to me ...

ROBERTS: Whose fault is that?

BONO: You know, politicians. They love signing checks, but they don't like cashing them. They love the photograph. These G-8 meetings, you'll see myself and my partner Bob Geldof arm-wrestling with politicians up against the wall.

ROBERTS: You're very effective at doing that. You get access to a lot of places. I remember I was on a trip with President Bush once, and you walked on Air Force One.

BONO: It's the absurdity of celebrity. I don't consider myself a celebrity in this sense, I think I'm an activist who knows what I'm talking about. But yeah, we get access, and we use it. It's true that there was a very ambitious plan signed up in 2005 that further committed what was decided in the year 2000, that we could actually across eight goals completely change the face of poverty and hunger in the world. And there was a $25 billion bill by 2010 that would enable them to do that. They haven't come through on that. And another day I'll tell you why, but today I'm punching the air because malaria will be no more by 2015. And it's Americans, people from the private sector -- Peter Chernin, Ray Chambers, all kinds of people, Bill Gates, your mayor of this city, [Michael] Bloomberg, is an amazing guy. He's working on this stuff. I just want Americans to know that side of their country because I'm a fan of America. And, again, you would have candidates, you know, like John McCain taking time out this week to talk to us, Barack Obama before. This is fantastic.

ROBERTS: I was reading your blog on financialtimes.com. You've been writing all week, doing a great job too. You mentioned in one of your pieces you've been writing some lyrics. And I'm wondering where the lyrics are going.

ROBERTS: Are you writing about all this?

BONO: No, it's strange. It's very strange. I used to work in a garage when I was a kid pumping gas, and I used to dream when I was pumping the gas about getting to rehearsals on a Saturday so I could be with my band and write songs. The work that I'm doing now, as we say, we're working like a dog, living like a shih tzu. We're spoiled people. We travel well, but we work. On these issues, because you're working for the world's poor, we work like dogs. But I find myself at times, sometimes I just wake up in the morning, and I just want to be back with my band in a rehearsal room.

ROBERTS: You will be soon. New CD coming out next year.

BONO: I'm not complaining about the work. This is the most inspiring thing I've ever been involved in in my life, and it's working. It really is working. And that's why I'm on your show this morning. I just want to thank Americans.

ROBERTS: Good luck on the new CD coming out next year. We're looking forward to it.

All About Bono (Musician) • Contagious and Infectious Diseases • Poverty