(CNN) -- LeRoi Moore, saxophonist and founding member of the Dave Matthews Band, died Tuesday from complications stemming from injuries he sustained in an ATV accident, the band's publicist said. 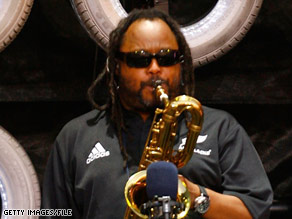 Moore, 46, died "unexpectedly" at a hospital, publicist Ambrosia Healy said in a statement.

Moore was taken to Hollywood Presbyterian Medical Center in Los Angeles, California, and had been rehabilitating at his L.A. home after the June 30 accident at his farm outside Charlottesville, Virginia.

The Dave Matthews Band was formed in Charlottesville in 1991 by Matthews, Carter Beauford, Stefan Lessard, Boyd Tinsley and Moore, an established saxophonist in the local music scene.

Their first album, "Remember Two Things," was released in 1993 and featured what would become the band's trademark mixture of jazz, rock and world-music stylings. iReport.com: Are you a Dave Matthews fan?

"Jazz is probably my main influence, but at this stage I don't really consider myself a jazz musician," Moore is quoted as saying on the band's Web site. "I have plenty of space to improvise, to try new ideas."

The band's follow-up record, "Under the Table and Dreaming," has been certified quadruple-platinum, selling over 4 million copies.

The group went ahead with a scheduled show Tuesday night at the Staples Center in Los Angeles. Jeff Coffin, saxophonist for Bela Fleck and the Flecktones, has been sitting in for Moore since Moore's accident.

Matthews announced the death of the band's "dear friend" to the crowd.

Concertgoer Christian Tomas of Anaheim, California, said by telephone from the Staples Center that word of the death had spread through the crowd before the show.

"All of us are just really sad and down about it," said Tomas, a longtime fan. "But if Dave and the band decided to go on with the show, that means they know it was the right thing to do and Leroi would have wanted it."