(CNN) -- Soul singer and arranger Isaac Hayes, who won Grammy awards and an Oscar for the theme from the 1971 action film "Shaft," has died, sheriff's officials in Memphis, Tennessee, reported Sunday. 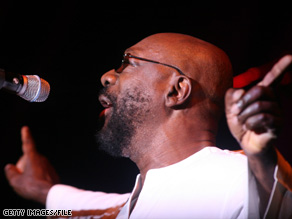 Relatives found Hayes, 65, unconscious in his home next to a still-running treadmill, said Steve Shular, a spokesman for the Shelby County Sheriff's Department.

Paramedics attempted to revive him and took him to a hospital, where he was pronounced dead shortly after 2 p.m., the sheriff's department said.

No foul play is suspected, the agency said in a written statement.

Hayes was a longtime songwriter and arranger for Stax Records in Memphis, playing in the studio's backup band and crafting tunes for artists such as Otis Redding and Sam and Dave in the 1960s.

In 1971, the theme from "Shaft" topped the Billboard Hot 100 for two weeks and won an Academy Award for best original theme song. The song and the movie score also won Grammy awards for best original score and movie theme.

Hayes won a third Grammy for pop instrumental performance with the title track to his 1972 "Black Moses" album.

From the late 1990s through 2006, Hayes provided the voice of "Chef" for Comedy Central's raunchy animated series "South Park," as well as numerous songs.

The role introduced him to a new generation of fans, but he left after the show lampooned his own religion, the Church of Scientology.

He was inducted into the Rock and Roll Hall of Fame in 2002. In a CNN interview at the time, Hayes credited his success to "adjusting and constantly evolving, expanding and trying to stay as young as I can."

The new generation of popular musicians, he said, "could use a little more substance like we had in the day."

"They're standing on our shoulders. Some of them don't realize [it] because they sample me so much," he said.

Hayes credited his role on "South Park" with expanding his fan base, and said that he had almost passed on the job.

"I started to walk out. I thought it was a Disney thing. I [had] never heard of this thing," he said. But his agent persuaded him to tape some episodes.

"Toward the opening I started having trepidations -- 'Oh my god, what have I done? I've ruined my career.' But when it aired, the ratings went through the roof," he said.

A 1992 visit to the royal family in Ghana was a life-changing experience for Hayes, he said.

"I went back on speaking engagements and encouraged African-Americans to go to Africa [to] interact socially, culturally and/or economically," he said.