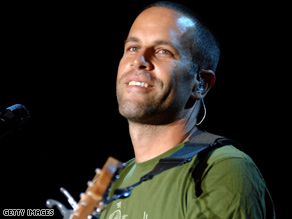 Jack Johnson makes sure his business and his concert venues are environmentally friendly.

Tabbed as a "mellow rocker" by perhaps one too many publications, the chart-topping singer-songwriter has a fire within that belies his laid-back manner -- a fire that extends to his company, Brushfire Records, and his environmental activism.

Johnson started the record label in 2002 "as a way to put out soundtracks for surf movies we were making," he says. "Then our friends G. Love and Special Sauce were coming to the end of their record deal with another label, and the idea came up to put out their stuff."

The Hawaii-based artist -- whose latest album "Sleep Through the Static" hit No. 1 in the U.S. and sold over 2 million albums worldwide -- has continued to assemble talent. The label's roster now includes indie-rockers Rogue Wave, folk-pop musician Mason Jennings and keyboardist Money Mark.

Johnson says the record label is not driven by dollar signs.

"We never try to talk anybody into joining the label, but we just offer a lot of creative control over all their music and a fairer deal than with most other labels," he explains.

Rogue Wave frontman Zach Schwartz is one of the converts. "The music business is traditionally pretty cutthroat, nasty and evil, but [with Brushfire], it is not that way," he tells CNN. "You can make the music you want to make."

Still, even in these major-label-dominated times, artist-friendly labels aren't unusual; Dave Matthews has also attracted talent with his ATO Records. It's in making Brushfire a model of green business that Johnson and his colleagues have stood out.

As keen environmentalists, Johnson and his team have required Brushfire and its distributors to engage in earth-friendly implementations that have influenced others in the record business.

"The music is one thing, but there is this business side," says Zach Gill, a Brushfire solo artist and member of Johnson's touring band. "I think more and more businesses are saying, 'Yeah, we want to be responsible. Responsible to our employees. Responsible for the waste our company generates.' We're starting to see that a lot in all kinds of businesses, not just in music," he says.

Entertainment industry giant Universal Music Group -- the largest family of record labels in the recording industry -- has taken notice. Under Brushfire's direction, UMG uses recycled stock on all of the packaging for its releases, including movies, ensuring that the paper is as environmentally friendly as possible. Some is even made using wind power.

Moreover, Brushfire's artists have exerted their eco-influence on venues and promoters for concert tours worldwide. The tour rider, a checklist of artists' requirements at each venue, usually consists of specific brands of beer or (in one case involving Jennifer Lopez) the way the coffee is stirred. Brushfire uses an EnviroRider, a handbook of eco-friendly options and actions for various components of concert tour production.

"It gets augmented every year. What started out as suggestions are now becoming requirements [for us to play at a venue]," says Johnson.

Johnson and his management also created All At Once, a social action network that provides tools and information to people who want to become more involved in their community and worldwide. Visitors to the All At Once area at tour venues will be rewarded with exclusive music downloads by their favorite Brushfire artists. Johnson's charity, Ohana Charitable Foundation, will match any donation (up to $2,500) to nonprofits made by fans at the shows or online.

"We shrink our carbon footprint always, but we have all these nonprofit groups that we all work with," says Johnson. "Money from the shows goes to these groups and helps bolster their memberships so that after we leave the town, these groups can continue to do good things. So more than just lessening our negative [environmental] impact, it's actually leaving a positive impact [wherever we tour]," says Johnson.

Back at home, Brushfire has adopted a similar strategy. All the power for the recording studios and the offices is generated by solar panels. Insulation is supplied by cotton from scraps of blue jeans. Energy-efficient lighting runs throughout the building. Second-hand furniture is all you will find in its offices.

The mission resonates with the other artists on the label's roster.

"For me, it's so great to be a part of the label because so many people provide information about what we can do to make it better -- touring more efficiently, biodiesel -- stuff like that," says Jennings. "I'm learning a ton being around those guys."

At bottom, the atmosphere of collaboration and common purpose is rooted in the shared love of music, says Gill.

"Music is the great synchronizer. They've become quite a wonderful community to be a part of. I feel grateful to Jack for having the idea to bring together all these like-minded people to make music together," he says.

Johnson agrees. "It's everything. It is the whole reason to play music. I learn so much from playing with these other musicians," he says.