When Billy Joel met 'The Stranger' 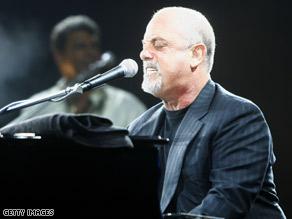 If "The Stranger" hadn't been a success, Billy Joel suspects he would have been dropped from his label.

For a guy whose career had started out promisingly, he'd undergone more setbacks than a wild-armed pitcher. In his teen years he was a session pianist on Shadow Morton-produced records (including, allegedly, the Shangri-Las' "Leader of the Pack"), but failed with his groups, including a heavy-metal duo.

He followed his first Top 40 hit, "Piano Man," with a bitter second one, "The Entertainer" (in which he sang, "If I go cold/I won't get sold/I'll get put in the back/In the discount rack/Like another can of beans," over an incongruous synthesizer track). He was considered a singer-songwriter with great potential but bickered with his label and his producers.

Making 1976's "Turnstiles," he fired producer James William Guercio -- a consistent hitmaker with Chicago -- and took the helm himself, with uneven results.

And yet he still had something, remembered Phil Ramone, who was to produce Joel's 1977 breakthrough, "The Stranger."

At a 1976 Columbia Records convention in Toronto, Joel opened a musical showcase and "ripped the crowd up," Ramone recalls in a phone interview from Connecticut. "My friends said, 'Watch this guy.' "

And then there was a series of concerts at New York's Carnegie Hall in early June 1977, featured on the new anniversary edition of "The Stranger" (Columbia/Legacy), out Tuesday. (A special edition of the release also includes a DVD of other Joel performances.) Known then, as now, as an exciting live performer, Joel and his band gave a series of performances that impressed Ramone -- though, he noted, the recorded versions paled in comparison.

"I watched what he had done and tracked his past records," he says. "Everything I'd seen hadn't been captured on record."

"The Stranger" turned out differently.

Joel came through with a top-notch set of songs, and four of them -- "Just the Way You Are," "Movin' Out," "She's Always a Woman" and "Only the Good Die Young" -- became hits. "The Stranger" established Joel as a best-selling artist -- reportedly, upon release, it was the biggest-selling Columbia album in history -- and propelled him to his Rock and Roll Hall of Fame career.

Watch Joel perform "Only the Good Die Young" in Russia »

At the time, he just wanted to make a consistent record.

"I don't recall feeling this was going to be the breakthrough. We were just happy with the album we were making at the time," Joel says in the press materials for the "Stranger" re-release. (Joel wasn't available for an interview with CNN.)

He acknowledges, though, that "The Stranger" could have been his last stand.

"I didn't know this at the time, but had it not been a successful album, the label probably would have dropped me. 'Cause you have to remember, this was my fifth album without having had a major hit," he says.

Joel interviewed several producers, Ramone recalls, including the Beatles' George Martin. Ramone, known for his graceful touch in the studio, was coming off Paul Simon's "Still Crazy After All These Years" and the Barbra Streisand "A Star Is Born" soundtrack. He and Joel hit it off at "an Italian lunch that took forever," Ramone says, and in July went into the studio to record. The album was recorded in three weeks -- very quickly, says Ramone.

The producer remembers the sessions as full of humor, with his most difficult task reining in the members of Joel's band. It was an accident that Ramone ended up included in the group portrait on the album's back cover, dressed in New York Yankee regalia -- "I only posed because I thought, 'They'll never use this,' " he says.

"The role I played was kind of like the captain of the team," he says. "I doled out punishments -- it was a crazy, lunatic group. There were times I'd throw out [ideas] and they'd say, 'No way.' They all had great opinions."

Then there was Joel, a forceful singer who, Ramone observes, is also "extremely vulnerable." The singer had a tendency to hide behind his song's characters; Ramone urged him to put more of himself into the vocals in "The Stranger," and continued the advice for succeeding albums.

"I would say, 'When is Billy Joel going to show up?' " Ramone says. "You have to adapt [the character] to you."

Running through the album's tracks more than 30 years later, Ramone says there's always something he'd like to change, but in general he's very satisfied with the record, particularly the songs "Scenes from an Italian Restaurant," "The Stranger" and "Just the Way You Are."

The latter, he notes, was supposed to have been spiked -- Joel, who wrote it for his then wife, thought it was too syrupy. ("A chick song," he's called it.) Moreover, Ramone's suggestions for the song met with resistance: Drummer Liberty DeVitto rebelled against the Brazilian baion beat, and the band was unhappy when Ramone tapped jazzman Phil Woods to play the alto sax solo.

But the song proved to be the album's big hit.

"They put out 'Movin' Out' [as the first single], and it [failed]. And then out of nowhere came 'Just the Way You Are,' " Ramone says. The song got a big boost when Joel appeared as the musical guest on "Saturday Night Live" in February 1978 and eventually won Grammys for song and record of the year.

"The Stranger" was the beginning of a fruitful run for Joel and Ramone. The pair made seven more albums together, including the No. 1 records "52nd Street" and "Glass Houses," and still maintain a warm relationship, says Ramone.

Joel, who will play the final two concerts at New York's soon-to-be-closed Shea Stadium July 16 and 18, has long since put the questions of "potential" to rest.

"I didn't necessarily set out to be a big worldwide, international super rock star kind of guy. I set out to make a living as a musician, and this is the way it happened," he said.

All About Billy Joel