Editor's note: In our Behind the Scenes series, CNN correspondents share their experiences in covering news and analyze the stories behind the events. CNN's Lola Ogunnaike writes about a troubling e-mail she recently received. 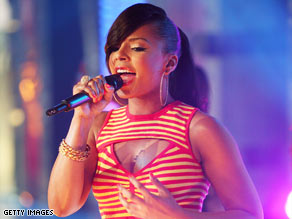 NEW YORK (CNN) -- I received a really disturbing e-mail the other afternoon.

"Do you know the person pictured in the following video," it read. "If so, please contact me immediately. Your life might be in danger." The sender claimed to be a Detective James Nicholas, Director of Crime Prevention for the Universal Crime Network.

It's not everyday that I get death threats, so naturally I freaked, clicked on the link and up popped a news report about a series of copycat murders that had been inspired by the R&B singer Ashanti's video "The Way That I Love You," a song about a woman who discovers her boyfriend has been unfaithful.

Clutching a butcher knife and dressed in beaded gown, she cries and croons about betrayal. The cheater ends up dead in bathtub.

Jealous lovers, according to the report, were on a rampage -- and the next victim, it suggested, would be me. On the wall of one of the crime scenes were the words "Lola Will Die," written in what appeared to be blood.

Turns out the entire thing was a hoax, a publicity stunt created to help Ashanti sell her latest album, "The Declaration." Visitors to her Web site were invited to fill out a "gotcha-gram" questionnaire, which would allow one to personalize the news report. The target would receive an ominous e-mail from a "detective" and the name scrawled in blood at the fictional crime scene would be theirs.

It's a great stunt if you're pushing a slasher flick, but isn't R&B music supposed to be about love and romance and not serial killings?

Amid protests, Ashanti's record label Universal Music shut down the "gotcha-gram" portion of her Web site Wednesday. When I asked the label about the "gotcha-grams" earlier this week they issued a terse "no comment" and directed me to an article in which Ashanti said the grams were a better alternative to actual violence.

She once called the grams "an incredible online viral tool." She's since changed her tune.

"Following discussions with Ashanti, we have jointly decided to remove the TheWayThatILoveYou.com website that hosts the Gotchagram," read a statement from the singer's label. "Ashanti and her music have always been about self-empowerment and addressing the issues that are most meaningful to her. We stand by our artist and her creative choices."

That Ashanti would have to resort to lame PR stunts to sell records is as much an indictment of her label as it is of the singer. In recent years, hip-hop and R&B have been synonymous with violence, but she hasn't. Even as the sole female member of the rap collective Murder Inc., she was always more good girl than gangster moll. Sullying her act in the hopes that it would translate into album sales didn't work. Not all press is good press.

Since its release last week, 80,000 copies of "The Declaration" have been sold. A respectable number, but a far cry from the 400,000 albums her debut sold in its first week six years ago.

Back then Ashanti and Beyonce were in lockstep for R&B princess supremacy. Beyonce's career has since soared into the stratosphere. She's currently No. 4 on Forbes' Celebrity Power 100 list (right behind Oprah and Angelina Jolie).

Ashanti is not on the list. She's also had to eat the dust of veterans like Mary J. Blige and upstarts like Rhianna and Keyshia Cole.

Here's one way to salvage her career and generate positive buzz: A killer second single.