LONDON, England (CNN) -- I have a confession. As a music style, heavy metal has completely passed me by. I don't understand it. I'm not even sure I want to. "Bring your daughter to the slaughter," bellows Iron Maiden's Bruce Dickinson. Why would I want to do that? Why would I want to listen to anyone even suggesting I do that? 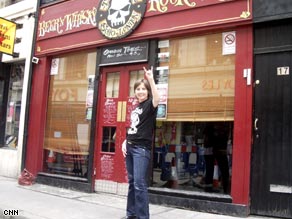 Outside The Crobar in London's Soho our intrepid reporter tries out her rock moves.

While the thought of spending the evening head banging leaves me longing for an expensive glass of merlot, slightly fruity, and perhaps a long sit down, I can't escape the feeling that I'm somehow missing out.

As a child of the 70s, how could I have missed the birth of a wildly popular new music genre right in the next decade? Even at the end of the 80s, when Iron Maiden was releasing its "First Ten Years" compilation of greatest hits, I would have been sixteen (or thereabouts), the perfect age to fall for the charms of a long-haired, rebellious rocker in tight leather pants. You'd think.

There's only one thing for it -- a crash course in all things metal with the man who knows, self-confessed metalhead Malcolm Dome, who also presents the chart show for 24-hour UK rock and metal radio station TotalRock.

I meet him at the TotalRock studios in Central London. The stairs are scuffed. It smells of stale sweat. I'm pleased to see Malcolm is wearing the traditional heavy metal attire of black T-shirt and black jeans. Obviously I'm going to have to go and buy a T-shirt, perhaps one with a skull on it.

"You can wear anything you want," Malcolm assures me. "You'd probably be surprised how many heavy metal fans there are who have very high-powered business jobs -- even members of parliament who are into metal. They can't go around dressed as I'm necessarily dressed now all the time because it doesn't fit into their jobs."

Fortunately for Malcolm, his job as heavy metal journalist and broadcaster almost requires him to look the part. He's been involved in the scene since the late 1960s, when he fell for a young heavy metal group called Black Sabbath.

His main allegiance later shifted to Led Zeppelin, but when it comes to music styles he's not fussy. "I've got eclectic tastes," he says. "I'm happy to listen to Frank Sinatra, listen to AC-DC, to all sorts."

Finally, we've found some common ground. If there's anyone who can convince me of the joys of heavy metal, it's someone who also appreciates the soothing, melodic tones of Sinatra.

I've heard someone compare heavy metal to pantomime, I say. Surely that can't be true?

"It's absolutely panto," Malcolm enthuses, adding "Sammy Goldwyn said that any film should start with a climax and build it from there. And that's what metal does. It starts with a big, big stage show and builds it from there. Of course it's panto. It's 'he's behind you', it's the whole larger than life character, it's circus, it's frivolity."

He hastens to add that a lot of time and effort goes into staging the shows, and from that perspective, it's completely serious. The problem with heavy metal, Malcolm says, is that the mainstream media misrepresented it for years.

"Every time the mainstream media used to cover it in the 70s and 80s, it was done from the point of view that 'this is weird, we don't understand it, we're going to go away not understanding it but we're going to present it to you anyway,'" he says.

Heavy metal was painted as the dark preserve of working class men who wore denim and leather and were, for the most part, sexist. That's even before you take into account accusations of devil worship and Satanism leveled at the genre by Christian activists in the 80s.

"You can understand people actually seeing what was being presented to them thinking 'I don't get it and I don't want to get it,'" Malcolm says. Now many more people "get it." Some 30,000 people listen to TotalRock each week, many of them women.

"It's ended up being I think a music that attracts if not fifty percent female fans then certainly a very big minority. The fact is metal has never tried to exclude women."

So what of lyrics like "bring your daughter to the slaughter"?

"'Bring Your Daughter To The Slaughter' was actually written for a movie," Malcolm explains, "One of the Nightmare on Elm Street movies. However, it is not about killing people. Slaughter was a metaphor for the party. So it was actually a fun representation. Metal has never openly espoused violence towards anybody."

It should be stated here that there are varying degrees of heavy metal, from the hair metal of carefully-coifured Jon Bon Jovi to the black art of New York doom metal band Unearthly Trance.

"What makes Unearthly Trance so heavy is that they literally make your bowels rumble," Malcolm says. "They are so intense. But it's also hypnotic. And strangely soothing," he adds.

What binds them all is a fierce dedication to the style of music and an admirable loyalty to their chosen bands. There seems to be none of the fickleness associated with the pop world where young performers are routinely thrown on the scrapheap after a few hits -- or flops.

As Malcolm says, it's not unusual for bands to have a career that spans decades. Iron Maiden has been going for almost 30 years. Black Sabbath for even longer.

So is there any age when heavy metal fans should retire gracefully from the scene?

"Absolutely not, no, no, no," Malcolm says, looking slightly shocked. "If you love it and enjoy it why should you have give it up because you reach a certain age? Definitely not. Metal is ageless."

It's not too late for me then. What a relief.