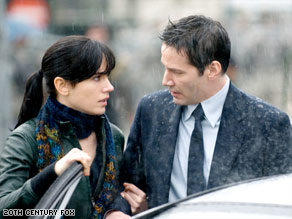 Jennifer Connelly and Keanu Reeves star in "The Day the Earth Stood Still."

Klaatu the spaceman first visited these parts in Robert Wise's 1951 Cold War classic "The Day the Earth Stood Still," when he threatened to blow us all up unless we stopped threatening to do the job for him.

Klaatu wasn't exactly greeted with open arms back then -- he was shot and hounded for his troubles -- and if the earth has moved on over the past half century, you wouldn't know it from the trigger-happy welcoming committee that surrounds his luminous snowball of a space craft in New York's Central Park.

Where sci-fi films in the 1950s used to see red(s), today they go green. Directed by Scott Derrickson ("The Exorcism of Emily Rose") and scripted by David Scarpa ("The Last Castle"), "The Day the Earth Stood Still" 2.0 ditches the Cold War theme. Klaatu (Keanu Reeves) means to save the planet, but war isn't the problem. Mankind is the problem.

The filmmakers have come up with an effective Spielbergian prologue, cutting from the Himalayas in 1928 to contemporary biology professor Helen Benson (Jennifer Connelly), whisked from her home by uniformed men in response to an undisclosed national emergency. It's strange to think that in the final hour the government will turn to molecular biologists for guidance, though true to form (as in the 1951 original) the scientists are quickly overruled by the politicians.

But once Keanu-Klaatu emerges from his blubbery placenta spacesuit, the movie shifts into familiar fugitive thriller terrain and the tension slowly drains out of it. Dr. Benson helps him escape to New Jersey where he can meet with an alien undercover agent in McDonald's, and she can introduce him to a true world leader, a Nobel laureate played by John Cleese.

If you're going to cast a top star as an alien being, Reeves seems a solid choice. He's always been able to process human emotion with a Spock-like detachment.

"This body is going to take some getting used to," Klaatu cautions shakily in his first scene, but in fact he gets the walking-talking thing down pat in no time.

He's a messianic figure -- he fires lasers out of his wrists, like a reverse-stigmata and he has the power to resurrect the dead (though unlike Jesus, Klaatu killed the guy in the first place). The climax even includes a plague of robotic locusts.

But the movie never comes up with a convincing explanation for why his superpowers don't extend to, say, picking up a telephone. Apparently the aliens have been monitoring us for at least 70 years, but Klaatu is taken aback to discover our emotional side. Mostly he learns this from Jaden Smith, who plays Dr. Benson's stepson Jacob. It's not necessarily a good emotional side: Jacob is a whiny, obstinate and disobedient little boy that would lead most extraterrestrials -- and not a few of the rest of us -- to reach for the destruct button.

Still, it's surely remiss to wipe out the species before lending an ear to Johann Sebastian Bach.

The original movie is beginning to show its age, but at least it holds up as a story. That's more than you can say for a preachy, draggy blockbuster that espouses a radical message of Luddite technophobia at the same time as it conspicuously plugs Honda and LG Electronics, and dresses up its half-baked thinking in blinding (but not that brilliant) CGI wizardry.

Johnny Carson used to joke that his 1964 bomb "Looking for Love" was so bad it was transferred to flammable nitrate film stock. If they're so determined to be green, perhaps the producers of "The Day the Earth Stood Still" would consider something biodegradable.