Daniel Craig and the pain of being James Bond

(CNN) -- Being James Bond isn't easy. Daniel Craig has the scars to prove it. 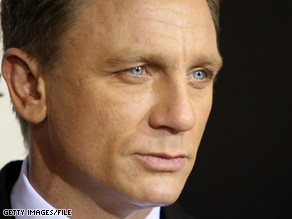 Daniel Craig at a Tribeca Film Institute screening of "Quantum of Solace" in New York.

It cost him eight stitches, a severed fingertip and several bruised ribs, but Craig has once again stepped into the shoes of James Bond for "Quantum of Solace," set to debut in U.S. theatres Friday.

According to Craig -- who did his interview with an arm in a sling -- the pain is just part of making a Bond film.

"I've always liked the physicality of the Bond movies," Craig said, "and as a film fan, I've always liked it when you're not being snapped out of the story line because you suddenly see it's a stunt man."

Watch Craig address the world of 007 »

The 22nd Bond flick picks up where "Casino Royale" left off. After being betrayed by the woman he loved, British spy 007 pursues the truth behind the organization that blackmailed her -- all the while fighting the urge to make the mission personal.

Director Marc Forster ("Monster's Ball," "Finding Neverland") said that he wanted this Bond to have a raw emotional side to go with the action-movie propulsion.

"I think that I wanted the film to feel sort of like a bullet. It ... keeps us on the edge of the seat until the last frame. But at the same time, that there is sort of an emotional texture to Bond's character, which was very important to me," he told CNN. "And that we feel that emotional texture, because Bond is a character who doesn't really open up, and doesn't really spill his guts out and tell people how emotionally he feels about things.

"But I think it was still important to feel that, and get a little hint of his pain he is carrying around. Because in the last one he lost the love of his life and he's out there trying to search for an answer."

Moviegoers haven't seen the last of Craig. In addition to the Bond series, he's also taking the lead role in two other major pictures this year. "Defiance," slated for release next month, is a story set during World War II; "Flashbacks of a Fool" is a British film about an overindulging American actor.

"It's a story I'd never heard of ... about a group of brothers who survived the war in the forests of Belorussia with 1,500 other Jews," Craig said of "Defiance." "[They] created a society in the woods, and survived."

Craig, Britain's highest paid celebrity according to Men's Vogue, may be recognized around the world -- but that doesn't make finding his next role any easier. To Craig, it isn't the payday that's important -- it's the story.

"If there were a dearth of really good scripts out there, and being Bond could get me those really good scripts, it would be easy," he said. "But there aren't. They're few and far between, and I have to go out and look for them." iReport.com: Will you see Bond's latest?

Agent 007, Craig's most widely known role, is one he admits was enjoyable to develop in "Quantum of Solace," with its reported $230 million budget.

"He's had his heart broken, and he's been betrayed," Craig says of his character. "The relationships he's had are not defined, and so he's not defined." Craig says Bond moves to a place of understanding in this latest film -- a "sort of peace within himself," hence the marquee "Quantum of Solace."

Olga Kuryenko, who plays the mysterious Camille in the film, told CNN she admires Craig's looks -- and his mettle.

"I actually think he's one of the best Bonds ever," she said. "I really liked 'Casino Royale.' I remember I watched it [and] I had no idea I was going to be in the next one. ... And I loved the film, he was great.

"He's a very good-looking blond, you know. And his eyes [are] just piercing. And he has this toughness, you know. ... His body's very strong and he's just, he looks like he can really break your neck."

"He really put a three-dimensional feel back into Bond," he said. "And collaborating with him and working on the script and on the character, it dawned on me that he really has a deep understanding of what this character is like and ... he understands its details. ... He lends Bond this sort of realistic nature that we all can relate to the character. And I think that's really important in the times we live in right now."

It may be the 22nd Bond film in the franchise, but Craig doesn't look back. How does he feel he matches up against his predecessors as the man behind the super spy?

"That's for other people to decide," he says. "I don't make those comparisons."