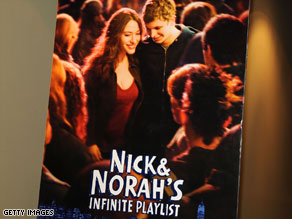 Screenwriter Lorene Scafaria worked from the novel by Rachel Cohn and David Levithan.

Here, for the umpteenth time, are a couple of young people who straddle the borders between hipster and geek, insider and outsider, reasonably well-adjusted teen and roiling mess of adolescent self-doubt.

And on one enchanted night, driving around in a Yugo the pumpkin color of Cinderella's coach after midnight, they find each other. But here, too, for the first time in a long time, are characters who seem honestly rooted in an authentic kids-of-'08 universe.

Welcome to a world that may feel like a discovery to any viewer not currently a teen habitué of New York's downtown melting pot of straights and gays and Jews and goys and NYC sophisticates and bridge-and-tunnel gatecrashers, awake at all hours and open to the improvisation and velocity of the new.

At first, the pair don't realize that they fit together like the original Nick and Nora in the peerless "Thin Man" screwball comedies of the 1930s and 1940s, this time bound together by a connoisseur's love of indie rock, hole-in-the-wall Lower East Side clubs that pound all night, a fierce ability to banter, and a luminous goodness.

When the two meet cute at one such club, Nick is nursing a bruised heart -- a Cera specialty -- injured by a shallow bee-yotch named Tris (Alexis Dziena). Norah, who has got a mooching, wannabe-musician boyfriend (Jay Baruchel) somewhere in the wings, knows Tris as a private school classmate and longtime frenemy, but that's not the point: At the moment, Norah is accompanying her hard-partying best friend, Caroline (fearless and funny Ari Graynor), in pursuit of an elusive underground band rumored to be playing somewhere in the city late that night.

It's Nick's gay pals who actually recognize that Norah is the girl worthy of their hetero buddy, and the boys engineer the getting-to-know-you circumstances, right down to providing the sullenly pretty, droopily dressed Norah with foundation garments to enhance her delicious figure. It takes a gay man to offer a woman straight talk about her "uniboob."

But one of "Nick & Norah's" most radical accomplishments is to incorporate a population of interesting, creative, cute gay guys who lead fulfilled lives that have nothing to do with being any straight person's colorful sidekick. (It's a stunning feat, really, tossed off with ease by director Peter Sollett and screenwriter Lorene Scafaria, working from the novel by Rachel Cohn and David Levithan.)

Another achievement is granting Norah a Jewish identity that's as much an unremarkable, unshticky part of who she is as the fact that she's cool, she loves rock, and she doesn't drink. And a third is that, in the zonked-out person of Caroline (and in the gonzo risks taken by Graynor, an accomplished New York stage actor) the movie offers a whole new feminist angle on the joys of gross-out humor.

Wild horses or a speeding Yugo couldn't drag from me the details of Caroline's greatest descent into transgressive yuccckkk; the whole scene is a tribute to Graynor's gumption, with help from the fluorescent-lit tattiness of Manhattan's Port Authority Bus Terminal, where it all goes down.

But come to think of it, so much goes down on Nick and Norah's one enchanted evening that the best advice is to enjoy the ride -- the actual ride -- around this vibrant new New York.

All About Movies • New York City