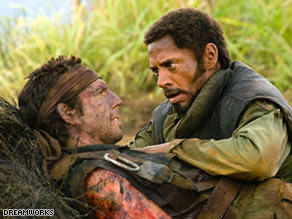 When the bat's been away, Steve Carell ("Get Smart"), Will Ferrell ("Step Brothers") and Seth Rogen ("Pineapple Express") have all come out to play, and notched up lucrative returns, too.

Ben Stiller's sometimes hilarious "Tropic Thunder" is easily the biggest of the summer's blockbuster comedies -- and certainly the goriest. It's a high-concept meta-movie about an all-star Vietnam War picture (also called "Tropic Thunder") that goes very, very wrong. Stiller's "Tropic Thunder," on the other hand, gets it mostly right. Which is just as well, because it looks like it cost an arm and a leg to make.

The movie-within-a-movie is directed by Damian Cockburn (Steve Coogan) and stars chubby clown Jeff Portnoy (Jack Black), rapper Alpa Chino (Brandon T. Jackson), action beefcake Tugg Speedman (Stiller) and Aussie method man Kirk Lazarus (Robert Downey Jr.). The latter is a temperamental chameleon who takes his craft so seriously he has undergone skin pigmentation treatment for his role as a black GI. (Any resemblance to Russell Crowe is entirely superficial but can hardly be coincidental.)

Cockburn quickly loses the trust of his ferocious, potty-mouthed studio boss (in one of the film's more inspired insider gags, he's played by a real-life studio boss you may just recognize as Tom Cruise). So when disabled Vietnam vet "Four Leaf" Tayback (Nick Nolte) -- the inspiration for the movie -- suggests dropping them into the jungle and shooting the picture with hidden digital cameras, "guerrilla-style," it seems like a stroke of genius. That is, until the stars lose contact with the outside world and find themselves in a firefight with Golden Triangle drug lords.

"Tropic Thunder" is willing to push its gags right to the edge -- and sometimes over it. In the most famous example, the film has run into flak from disabled advocates for its repeated use of the word "retard," referring to Speedman's previous bid for artistic respectability, a sentimental "Forrest Gump"-style Oscar bid by the name of "Simple Jack."

Watch why several groups want to boycott the film »

Stiller does milk it, but the protesters are missing the point. If there's one group who should be protesting this movie it's the Screen Actors Guild. The heart-rending, soul-searching, consciousness-raising commitment we prize in our movie stars, particularly around Oscar time -- it's all beautifully travestied and lampooned.

An early bad-taste highlight has Tugg messing with his director's head. Literally. And the strained relationship between Alpa and Kirk -- who proves incapable of breaking out of his African-American character -- is terrifically juicy.

Downey's blackface performance is an appalling mixture of Mr. T and Uncle Remus, but at the same time he endows the actor with enough straight critical intelligence to appreciate the severity of their situation. The effect is simultaneously funny and a little disturbing.

Lazarus is the one character who leaves an indelible impression among some overly familiar caricatures. The Asian characters, in particular, rightfully belong in some third-rate "Deer Hunter" knock-off.

Which doesn't mean that "Tropic Thunder" -- which was written by Stiller, Justin Theroux and Etan Cohen -- isn't funny. It can be scattershot, even with its fairly safe targets, but when it hits it hits dead-on. (It's not wildly original and outrageous, though, to anyone who's seen Coogan in "Tristram Shandy: A Cock and Bull Story" or watched the Ricky Gervais series "Extras," in which Stiller played himself in one episode.) iReport.com: Share your thoughts on 'Tropic Thunder'

But after an hour or so the movie's one big joke starts wandering around in circles and we're stuck watching a painfully unfunny Jack Black flailing about in mock heroin withdrawal; Tugg reprising Simple Jack, yet again; and a silly, authentically B-movie climax which involves everyone shooting blanks.

Still, if it doesn't live up to its full potential there is more than enough to keep you smiling, not least its production values. The film was photographed by John Toll, who shot "The Thin Red Line," and he gives it a look to compete with the Vietnam movies it has in its sights ("Platoon," especially, gets a ribbing). There's also the now-cliched '60s jukebox soundtrack to go with it.

And though some of the caricatures wear thin, some of the acting rises to a high level. There's Downey, of course, but also Jackson and Jay Baruchel's nicely gauged supporting turns, and a blitzkrieg of celebrity cameos including Tobey Maguire, Matthew McConaughey and Jon Voight.

As for Mr. Cruise, he's still the best mover and shaker in Hollywood. He should try this stuff more often.